America served on a plate 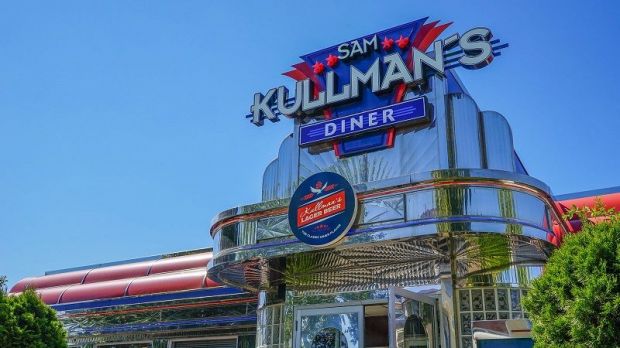 Two decades ago, the US-inspired diner concept Kullman's took off in Germany. The concept continues to show flexibility 20 years after its founding.

If you want to retrace the history of the barbecue and diner concept Kullman's, which has been making the hearts of fans of US cuisine beat faster in Germany for 20 years, you have to travel to the United States in the 1930s. After the collapse of the New York Stock Exchange had plunged the world economy into a massive crisis, American society very slowly got back on its feet and new fields of business emerged.

In Newark, during this period of tentative recovery, industrial worker Samuel Kullman developed a mobile snack bar to offer lunch at low prices, especially to office workers and laborers. It was a resounding success, and over the next few years stationary family restaurants sprang up along expressways. The idea and design of the modern diner found its starting point here: leather seats, chrome applications, long counters, bar stools. Thanks to its contemporary and pragmatic designs, Kullman's company became the largest manufacturer of diner modules in the USA in the 1940s.

When Thomas Feucht, a restaurateur from Franconia, began developing American themed restaurant and sports bar concepts for the German market in the early 1990s with his wife on behalf of various developers and breweries, they soon became enthusiastic about the original idea of the diner. "My wife and I wanted to create our own concept for Germany from this," says Thomas Feucht now some 30 years later. "Our premise was: either we realize our concept with an original diner from the USA - or we leave it alone."

The Feucht family quickly secured the naming rights for the "Kullman's" brand, but the authorities in Germany initially presented a greater challenge. Erect a building built in the U.S. in Germany? It took time for the building and management permits to arrive. Starting in 1999, the construction project was realized in Linthe on the A9 just outside Potsdam. Disassembled into four parts, the diner, which had previously been completely assembled in the New Jersey factory, could finally be delivered by container ship across the Atlantic to Bremerhaven, and from there it was brought to Linthe by heavy goods transporters.

In May 2000, the starting signal was given for the largest diner outside the USA with just under 200 seats. Families, US fans, commuters came to enjoy the flair of an original American barbecue. While initially only one location was planned, expansion in Germany followed quickly. Today, the company has four more locations in Germany: Kaiserslautern (opened in 2001), Regensburg (2003), Ludwigsburg (2010) and Würzburg (2014).

The Linthe and Kaiserslautern units, as well as the interior, were each built in the U.S., transported to Germany by ship, and erected at their respective locations. More Freestander stores are to be added in the coming years. Some diners, including the furnishings from the USA, were integrated into existing commercial buildings as storefront diners.

Orientation on the original concept

"To this day, we are guided by the original concept of an original diner," explains Karin Feucht. In addition to the furnishings, this also includes the culinary offerings. Although some of the original recipes have been subtly adapted to the preferences of German consumers, the portfolio speaks a clear language: Grilled meat ("New York Clubhouse Steak 200g" from 17.90 euros), spare ribs (from 15.90 euros), Better Burger (from 9.90 euros), sandwiches ("New York Pastrami Sandwich" from 13.80 euros) plus diner shakes (from 3.90 euros), breakfast ("Farm Fresh Eggs any Style" from 6.20 euros) and desserts (cheesecake from 4.90 euros). The best sellers at Kullman's currently include spare ribs and steaks.

Burgers have taken a bit of a back seat in recent years, according to Thomas Feucht. "This is also due to the fact that the better-burger hype in Germany has recently flattened out and passed its zenith." For Kullman's, however, this is not a problem - the menu is extensive and diverse. Vegetarian orders are picking up, and breakfast is doing well, too. "We're an original U.S. restaurant," says Feucht.

"We're not subject to trends, so we fly a little under the radar," - but of course that's a bit of a low bar, considering that movie scenes with Tom Hanks or Til Schweiger have already been shot at Kullman's restaurants. Their time in Manhattan as executives of the Empire D iner has also shown the Feucht family that entertaining "big names" in an unagitated and discreet manner is an important element when you often have to deal with well-known guests and want to treat them as diner-typical guests like you and me.

The dishes of a Kullman's diner are freshly prepared in the open kitchen behind the counter, always according to the guest's order. The family-owned business sources most of its vegetables from regional suppliers, the steak meat comes from South American highland cattle, the burger patties come from Germany, the buns from the in-house bakery, and the lager beer is brewed specifically for the five restaurants.

"The high quality of the food we use has always played an extremely important role at Kullman's," says Thomas Feucht. "That's also the reason we're a little more upscale for a diner concept." Dips, sauces, spreads, seasonings, ribs & patties, and buns are also available as BBQ Series for home and some wholesale and retail.

Even after 20 years, things remain exciting, the company flexible: due to Corona, Kullman's unceremoniously developed its own delivery and pick-up service, which customers can access and stock low-threshold via the homepage. The so-called carhop was also very popular during the lockdown: The ordered food was brought to the car window by the service staff at the selected time.

"This offer was very well received. After the Corona summer restart, we were partly above the previous year's level," reports Thomas Feucht. One benefits here, among other things, from the great trust of the guests that Kullman's has built up over the past 20 years. These are good prerequisites for the next 20 years.