"Guests are falling in love with restaurants all over again" 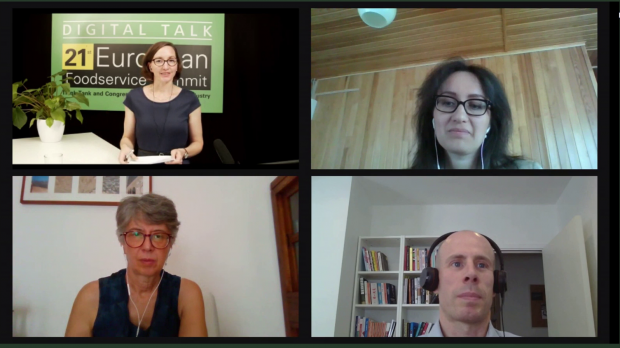 With the spring and summer, the covid restrictions for the gastronomy have been relaxed not only in Germany. Time to take a look at the neighboring countries. In the 5th Digital Summit Talk entitled "Beyond Lockdown - How Europe's Restaurant Industry is Dealing with the Restart Reality", Katrin Wissmann, Executive Editor foodservice Europe & Middle East, and her guests gave an insight into the situation in Italy, the UK and Russia.

According to all speakers, there was a clear recovery in the out-of-home market. In all countries an increase up to the pre-crisis level is expected in the short to medium term . In all countries, large, strong brands came through the crisis better in comparison. In addition, as in Germany, the Corona pandemic provided a significant boost to the trends of delivery, drive-through and innovations such as digitalization. And yet there were differences in the countries.

Italy: Boom of the terraces

Flavia Fresia, long-time hospitality journalist and correspondent of foodservice Europe & Middle East, described the situation of the out-of-home market in Italy as "bruised but surviving". Italy was hit hard by the pandemic, especially at the beginning of the crisis in early 2020, and relied on a regional traffic light system to combat it. Stricter measures applied in areas particularly affected by Covid-19. Since early June, all cafes and restaurants have reopened, and on June 21, restrictions such as curfews or limits on the number of people at tables in restaurant interiors also fell, Fresia reports. 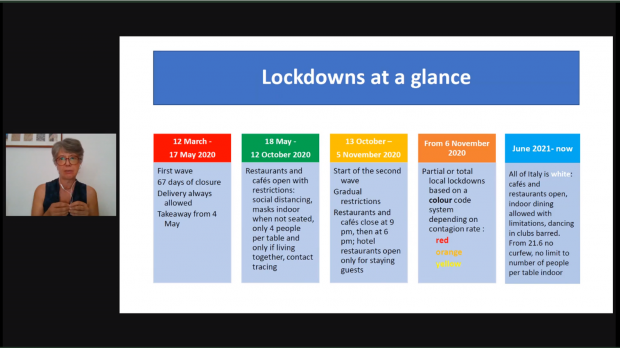 Especially in 2020, Corona hit the Italian gastro scene hard. 22,000 restaurants had to close, with 9,000 new openings. Annual consumer spending on out-of-home food was 915 euros per capita, below 1994 levels. In addition, 89 percent of restaurant and café owners complained of insufficient government support during the crisis. On average, a restaurant received just around 4,000 euros from the state.

Delivery is also one of the big growth markets in Italy. Already in 2020, sales in the delivery business rose to 863 million euros, an increase of almost 50 percent over the previous year. In 2021, sales of €1.4 billion are expected, driven by the bestsellers pizza, burgers and sushi.

With the restart, confidence among restaurateurs is also rising. As of June 2021, restaurant sales were still at 95 percent of pre-crisis levels. Fresia also quotes from the "Fie-Rapporto Ristorazione 2020" survey. According to the survey, 85 percent of foodservice operators tend to look positively into the future, even if half of them expect that certain changes will remain. And Corona has probably had a lasting effect on another change in the gastronomy landscape: While just a quarter of cafés and restaurants had outdoor dining before the pandemic, about half did after the crisis.

In Great Britain, no restrictions have officially been in force since July 19, Corona measures are only considered recommendations, reports Philipp Laqué, Managing Director RMS Revenue Management Solutions from London. About 10 percent of the venues had to be closed permanently during the crisis. Nevertheless, Laqué expects a complete recovery of the out-of-home market by the end of 2021.

A first hint: According to surveys, since June, the confidence of the guests is back and they are longing for "hedonistic experiences", says Laqué: "People are just falling in love with restaurants anew". At the same time, however, demands and expectations for food quality and service have risen, he said. If such improvements can be seen, restaurateurs can also charge higher prices, he said. 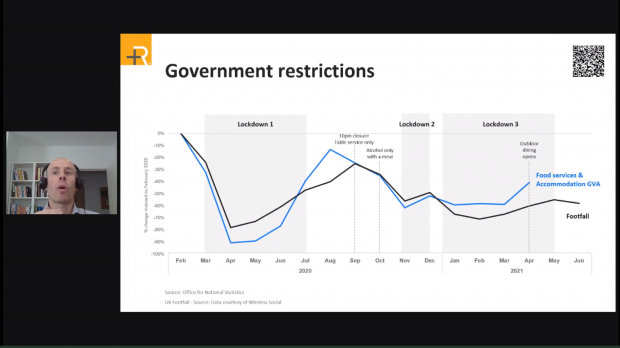 foodservice
Philipp Laqué explains the course of the restrictions in the UK.

Particular challenges are price increases and delivery problems in the supply chain, due to Corona and also Brexit. For example, he said, products are about 5 percent more expensive to purchase on average.

Laqué also predicts a change in the British gastronomy landscape that has already begun. Because more people are working from home, large office districts like the City of London are losing importance due to fewer walk-in customers, and residential areas outside London are becoming more attractive for food service providers. Laqué uses the examples of Pret and Leon to show how two major players that are heavily affected by this are adapting very differently.

For example, Pret sells its products via delivery services and, in some cases, food retailers. In addition, a coffee flat rate is intended to encourage customers to visit the stores more often. Under its new owner EG Group , Leon, on the other hand, is increasingly focusing on locations outside London with drive-throughs , especially for new openings. However, the brand is competing with other major players for these locations, which have been coveted since Corona.

Russia has taken a different approach to gastronomy than many other European countries, reports Julia Matveeva, Editor-in-Chief of Foodservice Russia. After August 2020, the government decided against a second lockdown for the catering industry. Some regional restrictions applied, but generally restaurants remained open. 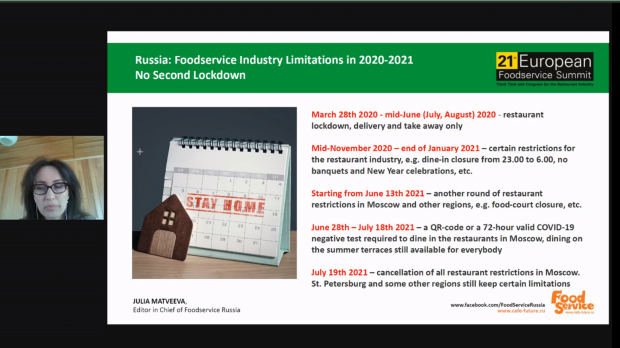 foodservice
Julia Matveeva on the restrictions in Russia.

Accordingly, the restaurant scene recovered better in international comparison, especially in 2021. For example, foodservice sales in January to May 2021 were only three percent lower than the same period in January to May 2019. Here, the opportunities for restaurants to stay open further paid off. Also in Russia, Delivery is among the crisis winners, strong brands come through the pandemic better.

Another peculiarity in Russia's restaurant industry concerns the employees. But especially in Russia's big cities, the country's size becomes a problem here. According to Matveeva, many restaurant employees come from distant regions or from abroad. With the onset of the pandemic, they have often returned to their home countries and often have not returned to the cities.

The search for good employees is a unifying element of the out-of-home markets of the different countries, the talk concluded. Common to the markets considered is also a cautiously optimistic view of the industry going forward, but - and the experts agreed on this - there is still a long way to go. Delivery is emerging from the crisis as a big winner in virtually all countries and it will be impossible to imagine the out-of-home market without it in the future. And despite all adversities, all speakers defined as a small plus point: Many companies had to tackle urgently needed changes and modernizations during the crisis, which were often postponed before, especially in the catering industry. 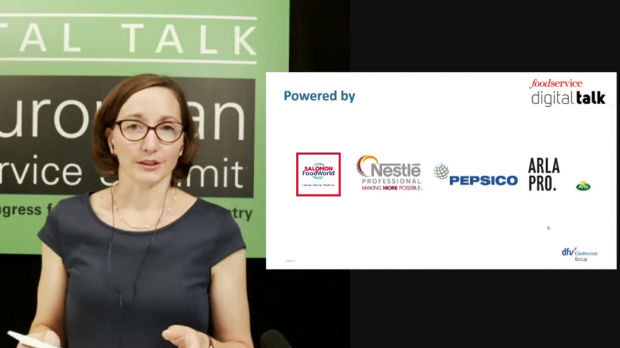 foodservice
The sponsors of the talk made it possible for spectators to participate free of charge.