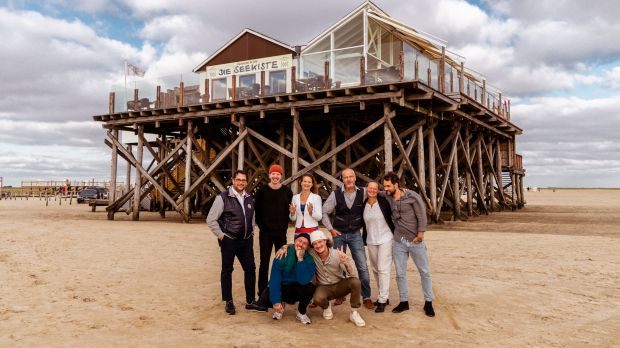 To this end, the two world travelers and founders of the award-winning Hamburg concept of the same name have taken over the Seekiste restaurant. What Johannes (Jo) Riffelmacher and Thomas (Cozy) Kosikowski are planning.

After their two restaurants in Hamburg, the two Salt & Silver makers Johannes (Jo) Riffelmacher and Thomas (Cozy) Kosikowski are now moving to the North Sea. In St. Peter-Ording, the two enterprising hosts are taking over the Seekiste. The previous operators Dirk and Maike Haupt are quitting at the end of this year's season after 14 years to take on new challenges.

On January 1, 2022, the globetrotters from Hamburg by choice will become the new tenants of the Pfahlbau at Böhler Beach, which is scheduled to open for the start of the season in April 2022. In the new project, the gastronomy career changers are reinventing themselves: while in the Salt & Silver restaurants on St. Pauli the dishes are inspired by Latin America and the Levante region, the team around the two founders has now set itself new goals: the "Salt & Silver am Meer" is to become climate-neutral, wants to work in a socially, ecologically and economically sustainable way, as well as capturing the charm of the region and turning it into a taste experience.

For the past three years, the restaurateurs in Hamburg have been growing special herbs and vegetables themselves, which they have learned about on their travels and incorporate into their dishes. This passion is to be significantly expanded in St. Peter Ording. Cozy & Jo can rely on a sworn team in two respects, because the main people responsible, who have already developed the first two Salt & Silver restaurants into supra-regional success concepts, will also accompany the new opening in St. Peter-Ording:

Simon Lindow, a native of Husum, who has been responsible for the implementation of the culinary vision at Salt & Silver since the opening in July 2017, will shape the new kitchen style as creative head and culinary director. Managing partner and sommelier Tobias Beck will keep the overall view. Bar manager Özgür Gezer, who has also helped shape the success of the Salt & Silver restaurants in Hamburg since day one, will be responsible for a surprising beverage concept. Florian Kleinschmidt, responsible for logistics and functionality, is on board to master the challenges of the location in the middle of the Wadden Sea Nature Park.


Salt & Silver can also rely on a proven team: A large part of the old-established Seekiste crew will remain with Böhler Pfahlbau and continue to guarantee high quality and friendly service after the new start.


About Salt & Silver
Since 2017, the two globetrotters, food lovers and enthusiastic surfers Johannes (Jo) Riffelmacher and Thomas (Cozy) Kosikowski have been running two restaurants in Hamburg's St. Pauli district - under one roof, right next to each other. Their concept Salt & Silver also won the Gastro Gründerpreis at Internorga in March 2017.

The street food bar is located in the Hamburg location on the left, the restaurant on the right. The street food bar serves Levante cuisine. The term covers the cuisine from the countries of Lebanon, Syria, Jordan, Israel and Palestine - supplemented by North African influences. Sweet drinks, the best shawarma, Levant-style tacos and sucuk in a date. The restaurant features special wines served with the Latin American family-style dinner.

The search for the best surf spots and the coolest street food recipes across Latin America also resulted in the book "Travel, Surf, Cook". In the meantime, "Tacos, Tequila, Tattoos", another book about her experiences and the culinary arts of Mexico, has been published.