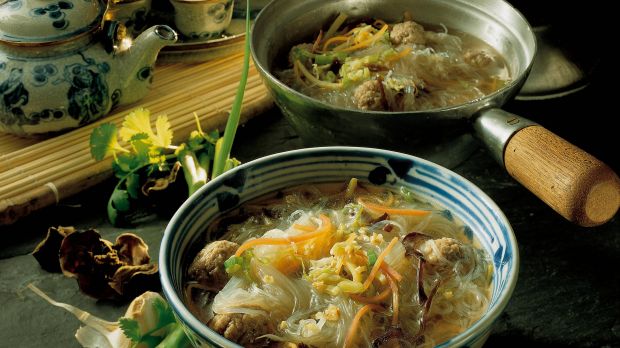 imago images / imagebroker
The popular pork meatballs used as soup garnish could soon be replaced by Beyond Pork in China in a more animal-friendly way.

Beyond Meat is launching a plant-based version of China's favourite meat on the local market. The Californian company presented a veggie version of chopped "pork" for the first time in November. In mid-November, guests were able to try the new product in five restaurants in Shanghai.

The vegetable pork mince is said to imitate the taste of the popular filling of many Asian dishes such as dumplings or spring rolls. It will also be served as ramen topping and in dishes such as spaghetti and meatballs, spicy bolognese, biscuits and gravy.

As a sausage variant, plantbased pork from Beyond Meat was already available earlier. Commenting on the new product, Candy Chan, the company's General Manager for China, told CNN Business platform: "We are delighted to launch Beyond Pork in China, setting a milestone for Beyond Meat. Beyond Pork is not only a completely new product innovation, but also the first vegetable-based Beyond Meat meat product created specifically for the Chinese market. In her statement, Chan continued: "The product's exclusive debut in China further enhances Beyond Meat's commitment to this important market".

In view of the high consumption of pork in China (31 kg/capita/year according to OECD), the Beyond Meat initiative is particularly promising. After all, the recent introduction of Beyond could be a welcome alternative for Chinese consumers right now and could also have an impact on the German pork market. In 2019, China was the most important buyer country for German pork exports with an import volume of around 777 million euros. This represents over 17 percent of German pork exports. Until the Chinese import stop in September , a similar trade volume was expected for the current year. With a world market share of 15.3 percent, Germany is the third largest pork exporter after Spain (15.6 %) and the USA (15.9 %).

Before Chinese consumers switched to other types of meat due to the reduced supply, pork accounted for around 70 percent of total meat consumption in China, according to official Chinese figures. In 2020, a certain amount of recovery enabled Chinese pork farmers to increase supply and lower prices, according to Rabobank analysts.

Boosting Beyond Meat growth in China

Beyond Meat, a company of Californian origin, considers the Chinese mega-market to be crucial for its own growth. According to CNN Business, the start-up had already announced a partnership with the Chinese technology giant Alibaba (BABA) at the beginning of the year to establish Beyond Burger in supermarkets. Since then, Beyond Meat products have definitely gained a foothold in fast food chains such as KFC, Pizza Hut and the Yum! brand Taco Bell, as well as with Starbucks (SBUX). In the USA, the pioneer for meat alternatives is also in talks with the fast food primus McDonald's for a McPlant burger.

Beyond Meat may have been able to win Chinese food wholesaler Sinodis as a local supply partner for restaurants, but other producers of vegetarian meat alternatives have also set their sights on the Chinese mainland market, including Impossible Foods, which launched its Impossible Beef in October in 200 supermarkets in Hong Kong and Singapore.