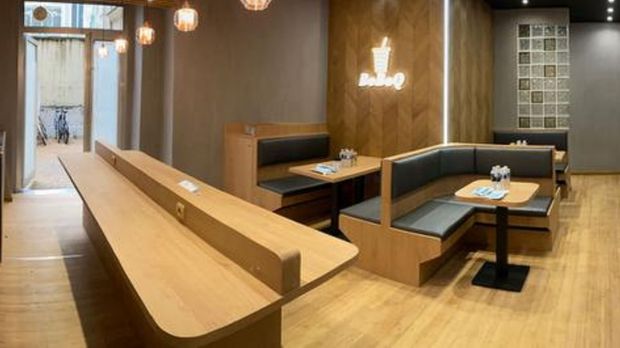 BoBoQ
The design of the BoBoQ stores is based on wood tones.

At its peak, the BoBoQ brand had more than 100 stores in Germany. Almost eight years later, there are only 18, but that is about to change.

This text is an excerpt. Read the full text in the November issue of foodservice.

Five new stores are to open in the next few months, and talks are being held with seven more units, reports Ming-Ching Lai, Managing Director of Germany BoBoQ GmbH. The company operates two Berlin stores under its own management, while all other stores are run by franchisees. "We want to take it slower than when we started, but in two to three years we want to have 100 BoBoQ stores again."

The brand's beginnings in Germany now date back just over ten years. The founding of the import company in 2009 was followed a year later by the first store in Berlin. "Then everything progressed quite rapidly," says Lai. "The young target group not only quickly adopted the trendy product Bubble Tea, but also made it big." At its peak, BoBoQ counted more than 100 stores in Germany. Numerous competitors joined the field, and even industry giants like McDonald's and Starbucks included bubble tea in their assortments.

However, just as quickly as the rise of the trendy product, so too did its decline. A media report in the summer of 2012 on the possible cancer risk of the beads contained in the tea - the signature feature - was followed by a whole wave of reporting on the negative health aspects of Taiwanese tea: too sweet, too artificial and, at worst, carcinogenic. "With that, the business was shattered. Within six months, we lost 99 percent of our customers," reveals Lai, whose most important distribution channel is not his own stores, but wholesalers and restaurants, which account for 80 to 85 percent of sales.

"Nevertheless, we continued to believe that bubble tea had a future in Germany," says Lai. "We held out for three years until things started to look up again." To arm itself against further attacks, the ingredients were put to the test and revised. "If you want, you can now order your drink completely free of preservatives and artificial colours - with syrups from Germany. We have also reduced the sugar content."

Corona, on the other hand, did not hurt the brand, according to Lai. ""We actually increased our sales in the summer. Business was like crazy." The bubble tea advocate sees two main reasons for the good crisis performance: ""One is that we are geared for the very most part to a to-go business, and the other is that our target group is very young. About 85 percent of our consumers are between 10 and 30 years old - and they wanted to get out and treat themselves again."

Similar experiences to Lai have been had in recent months by gastro lateral entrant Nicola Lommano with his bubble tea concept Buteeho. His enthusiasm for the bubble tea product was sparked during a trip to China ten years ago. "After the negative media coverage, however, I quickly buried the idea back in the drawer," says Lommano - only to unpack and implement it again last year. "I wasn't going to rely on bubble tea alone, though," he says. To minimize the risk, the former works council chairman opened a hybrid store in Waiblingen consisting of an Asian grocery store and bubble tea to go.

The success of the first store encouraged Lommano to open store number 2 just a few months later, and in April 2020 - in the middle of the lockdown - the second store launched in the university town of Marburg. "Since we also focused on the combination of Asian grocery and bubble tea in Marburg, we were also allowed to open during the lockdown."

Marburg was followed by Giessen in the summer and these days the fourth Buteeho store is opening in Heilbronn. With the expansion, the concept has changed: In Giessen and Heilbronn, Lommano is relying purely on bubble tea, and the Marburg store will also jettison food sales after a planned location change - after 95 percent of sales were beverages.