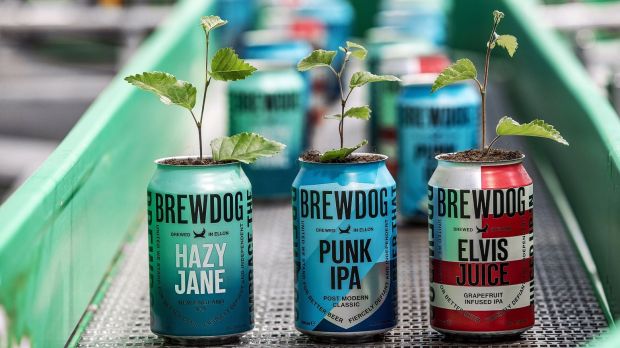 BrewDog
BrewDog invests in sustainability. The Craft Beer brewery from Scotland extracts more CO2 from the atmosphere than it emits.

The Brew Dog Craft Beer Brewery, founded in Scotland in 2007, announced this week that the company is not only operates carbon dioxide (CO2) neutral but  CO2 negative. In other words, arithmetically more carbon dioxide is removed from the atmosphere than is emitted - in Brewdog's case, the value of the removal of CO2 is twice as high as the emissions.

In order to reverse the company's CO2 balance, BrewDog, which is also active in Berlin with a brewery and the TapDog restaurant, has initiated various projects in recent years. According to the company, a total of 33 million euros have been invested in green change.

Today, all breweries and bars operated by BrewDog use exclusively green energy. The brewery and the restaurant DogTap in Berlin Mariendorf, for example, are supplied by Greenpeace Energy. The Scots convert spent grains, residues from the brewing process, into green gas, which is used for their own brewery, among other things. Anaerobic digesters use BrewDog directly on site to convert wastewater into clean water and to produce food-grade C02 for carbonating the beers. 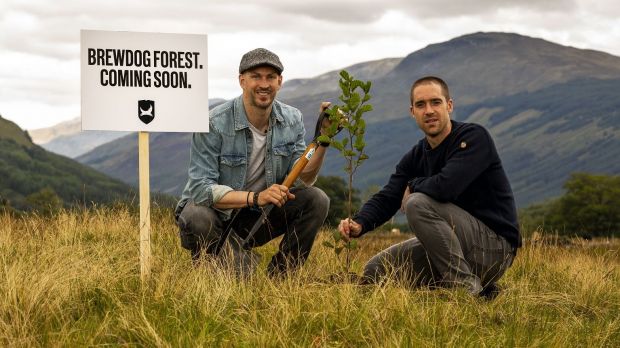 BrewDog
800 hectares of land in the Scottish Highlands were bought by BrewDog founders James Watt (left) and Martin Dickie for reforestation.

The brewery is also investing heavily in the electrification of its own fleet of vehicles. In order to reduce or avoid carbon dioxide emissions caused by long transport distances, the brewery has invested in building local breweries in the UK, Germany, the USA and Australia.

One million trees for the BrewDog Forest

In addition to the investment of over 33 million euros in green infrastructure, BrewDog has acquired an area of over 800 hectares in the Scottish Highlands north of Loch Lomond, which is now to be reforested. One million trees will be planted there over the next four years. The land will thus become the "BrewDog Forest". The planting of the forest area not only promotes biological diversity and naturally prevents flooding, but also promotes the economic development of rural areas. In addition to the planting of deciduous forests and the restoration of peat bogs, BrewDog Forest will also have a sustainably managed campsite.

"For too long, too much has been talked and too little done. Now a huge change is needed and we want to be a catalyst for that change in our industry and beyond. We are far from perfect. But we are determined to make rapid and fundamental changes to everything that is needed. Politics has proved totally incapable of dealing with this crisis. The change our world and society needs must come from a progressive economy. We want to play a clear role and show our colours here," emphasises James Watt, co-founder and Captain of BrewDog.

In order to implement its own sustainable corporate change, BrewDog brought in Professor Mike Berners-Lee, a leading expert in the field of sustainability and carbon footprinting.

About BrewDog
BrewDog was founded in 2007 - with no less a mission than to revolutionize the Craft Beer world. According to the two founders, Martin Dickie and James Watt, the impetus to start their own brewery came from the uninspired beer scene in the UK. Today, BrewDog is the market leader in craft beer and one of the fastest growing companies in the UK. BrewDog's Punk IPA is the number 1 craft beer in the UK.
In 2010 the first investment round of the crowdfunding campaign Equity for Punks took place. An initiative that has now raised over £67 million in five rounds - more than ever before in an online crowdfunding campaign. A community of over 130,000 Equity for Punk shareholders enables BrewDog to grow without having to sell out itself or its ideals.
BrewDog now exports beers to over 60 countries and operates over 100 bars worldwide, as well as breweries in Ellon (Scotland), Columbus, Ohio (USA), Berlin and Brisbane (Australia). The construction of a brewery in China is planned for 2020. 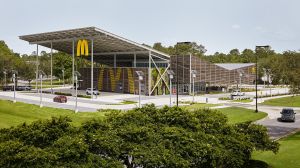 Flagship store generates its own electricity