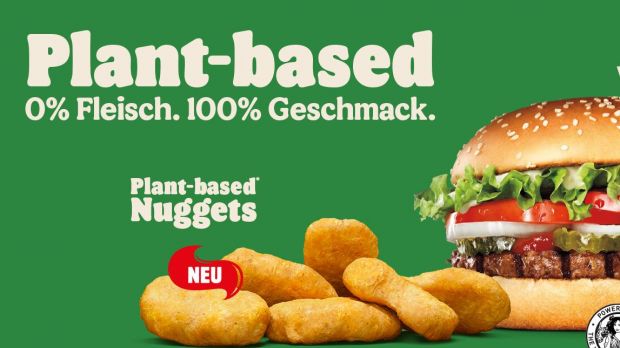 Burger King
Nuggets without chicken from September in all Burger King restaurants in Germany.

Meatless nuggets will be available in all German restaurants from September onwards. The cooperation with The Vegetarian Butcher will thus be continued.


"Zero chicken, but 100 % delicious" is how Germany's second largest catering company advertises its new plant-based nuggets. With this vegetarian alternative, Burger King is expanding its cooperation with Unilever's The Vegetarian Butcher brand. The range has already included a Plant-based Whopper, the company's signature burger in a meat-free version, for around a year.

The new meat-free and plant-based nuggets are said to be in no way inferior in taste to the original. A breading of deep-fried batter covers the soy-based nuggets. There is also a selection of vegan dips, such as classic ketchup or Sweet & Sour Dip.

Hugo Verkuil, CEO of The Vegetarian Butcher, says: "We are delighted to extend our collaboration with our colleagues at Burger King and together we have created a product that we are sure guests will love! The nuggets are soft and meaty on the inside, crispy and golden on the outside and offer a delicious vegetable-based alternative for all meat lovers who want to reduce their meat consumption".