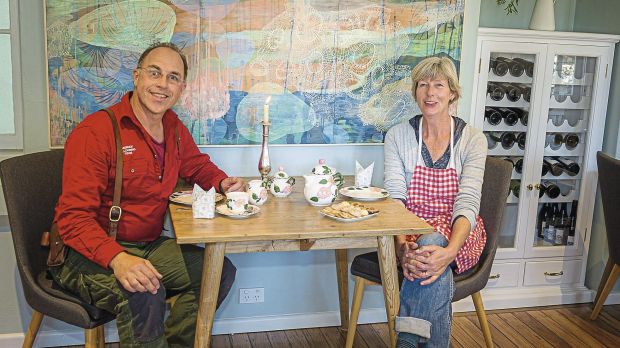 The German entrepreneurs Kirsten and Christian Uhrig have created a piece of home down under with their Café Restaurant Rosenhof. Their German specialities are extremely popular with the local public.


The small village of Tentereld in New South Wales at the end of the New England Highway is rather unknown in Australia, but in Australia it is also considered the cradle of the nation and recently a special meeting place for friends of German cuisine. Over the past three years, the two German emigrants Kirsten and Christian Uhrig have been converting a listed building dating from 1839 into the Rosenhof café-restaurant as a reminder of their home country.

Initially, the couple had built the eco-resort Terania Green near Byron Bay, which has since been sold. In November 2016, the Uhrigs were awarded the catering concession for the building in Tentereld and renovation work began. The first thing the couple did was to take care of the garden, remove excess fences and rubbish and plant 140 fruit trees, various vegetables, berry bushes and roses. Afterwards, the core renovation of the house was carried out with a lot of personal effort, parallel to which the gastronomic concept for the business was developed.

The goal: The Rosenhof should represent the ideal of German hospitality. The models for this were Café Steigleder in Wyk, Gutsschänke Neuhof and Larnach Castle in Dunedin, New Zealand. Since Tentereld is the twin town of Ottobeuren in the Allgäu, knuckles and dumplings are also cooked on special occasions.

On 6 September 2019 the Rosenhof was opened. "Our cakes and ice cream as well as the cold plates, our sourdough bread and rolls are the big sellers," says Uhrig. "But sausage and sauerkraut are also doing very well. At first we didn't want to make schnitzel, but then so many guests asked for it that we also offer it on special theme evenings." Also on the menu: classic breakfast with bread, butter, rolls and jam and a choice of cheese, egg, sausage and salad; hearty dishes such as a snack platter or warm sausages (Bockwurst, Weißwurst or Frankfurter) served with sauerkraut, potato or coleslaw. The lunch menu offers changing specialities such as roast beef with green sauce and fried potatoes, Leberkäse with fried egg and mashed potatoes or a butcher's platter.

The Rosenhof obtains its sausage and meat from a butcher from Brisbane who specialised in European and German sausage specialities 30 years ago. Kühne sauerkraut is available in Melbourne and Dr. Oetker products in Sydney. "German beers and wines are very popular in Australia, we buy them from a wholesaler in Brisbane - and our flour comes from a Demeter mill in Gunnedah," says Uhrig. "At first glance, this all seems very far away, but that's just the way it is in Australia, it's a big country."

This text first appeared in our sister newspaper ahgz.