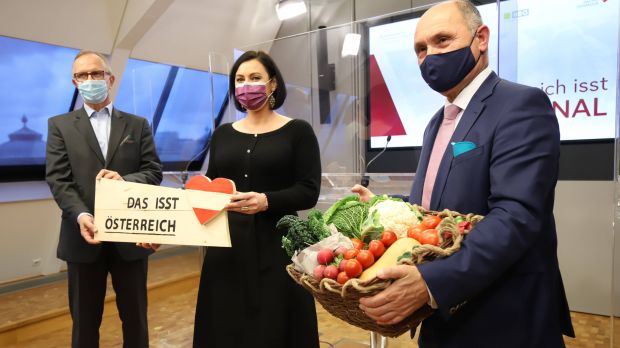 The Austrian government is set to promote the production of domestic food. As a means it has launched the initiative "Austria eats regional". The federal government wants to set an example in regionally focused food supply for public canteens, day-care centres and senior citizens' facilities.


"We want the people in Austria to focus on regional food, so the Federation will of course set an example", said Agriculture Minister Elisabeth Köstinger at a joint press conference with the President of the National Council Wolfgang Sobotka and the Managing Director of the federal supply agency Bundesbeschaffung GmbH, Andreas Nemec. "In public tenders and procurements, preference should be given to domestic products", Minister Köstinger emphasized.

Public procurement and canteen kitchens are an important lever for promoting domestic agriculture and food production. Which is why the gastronomy of the federal Parliament is now increasingly focusing on regional quality. Minister Köster: "Instead of chicken meat from the Ukraine, butter from Holland or apples from New Zealand, we want to rely even more on local products in community catering. Under the motto 'Austria eats regionally' we will support public canteens in procuring food regionally." Regional purchasing strengthens family farms, protects the environment through shorter transport routes and the added value remains in the country.

If only one percent more domestic food went over the sales counters, this would already create 3,100 jobs and an additional value added of 140 million euros, according to a sample calculation presented at the press conference. Before the corona pandemic, about 1.8 million people in Austria used to eat in canteens every day, about 450,000 of them in public institutions. At a cost of 1.35 million euros per day, this corresponds to a purchasing volume of over 330 million euros per year in public food procurement.

According to Köstinger, three out of four Austrians would appreciate more regional food on their plates. As a first step towards a greater part of regional food products was the introduction of the best bidder principle. The next step will now be for the Bundesbeschaffung GmbH (BBG) to help coordinate and implement similar initiatives for hospital kitchens, police, army or schools and kindergartens.

Critics object that in practice the "best bidder principle" introduced in 2018 for all foodstuffs in public procurement contracts with additional quality characteristics definable, has been undermined by extremely low prices. Therefore, an electronic purchasing tool for regional procurement in compliance with public procurement law is now being piloted. BBG Managing Director Nemec: "BBG is the procurement partner and implements the service point of the forum 'Austria eats regionally'. The BBG advises the parliamentary directorate and is the tendering body for its procurement projects. The call for tenders for the canteen is soon to be issued. Quality and regionality are essential parameters. Corresponding concepts are evaluated fairly and transparently by a commission of experts".