The state of chef training in the EU 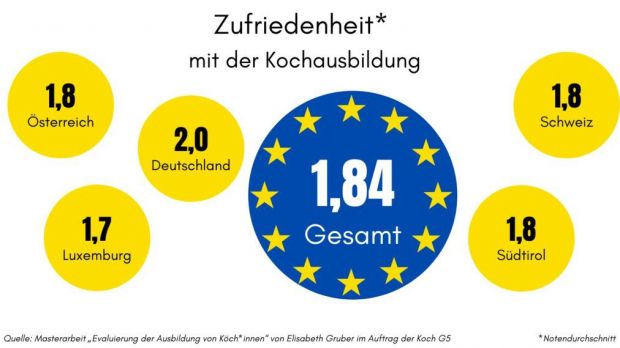 How big are the differences - and similarities - in culinary training within Europe? The G5 countries wanted to find out more and launched a joint project under the EU's Erasmus+ programme at the beginning of the year.

The topic of chef training occupies the hospitality industry in many European countries. Just how different professional practice and theory teaching can be is often evident in a single region or within a single city. But how big are the differences really? The Koch G5 countries wanted to know this more precisely and had culinary training in Europe analysed as part of an EU-funded project. For this purpose, surveys were conducted in schools, companies and associations in the participating countries. The associations of the Koch G5 can now use the results for their work.

The project was based on a Master's thesis entitled "Evaluating the training of chefs", the results of which are now available. The author is Elisabeth Gruber from Austria, who focused her thesis on cook training as part of her studies with a focus on "Sustainability Management in Health and Nutrition".

At the beginning of the analysis in the countries of Austria, Germany, Luxembourg, Italy (South Tyrol) and Switzerland, the research question was: How do young chefs evaluate the quality of their training and what concrete changes to improve their vocational training do they indicate? What are their experiences, what are their expectations?

More than 160 chefs aged between 16 and 25 took part in the online survey. From the perspective of satisfaction, professional skills and professional situation, Elisabeth Gruber subsequently drew up five hypotheses on the situation of cookery training in the EU.

5 Hypotheses on cookery training in the EU

Hypothesis I
The general satisfaction with the training is rated as satisfactory in all countries.

Hypothesis II
The professional competence "carrying out calculations" is not given in the area of purchasing, storage and calculation.

Hypothesis III
For young cooks, the nutritional aspect is not sufficiently given in the compilation and planning of meal sequences.

Hypothesis IV
The professional requirements for food processing and serving are met in all countries.

"In general, training is rated as satisfactory, although there are country-specific differences," the author summarizes her findings. "The willingness of young chefs and cooks to develop and advance their careers is present in all countries. Some knowledge gaps crystallize in the selected skill areas." For example, junior chefs say they "have not done enough shopping and ordering, have not acquired enough knowledge of nutritional and dietary knowledge, and have not received enough skill for meat, poultry and game preparations," Gruber elaborates. "They also express a desire for more modernity and creativity in food and menu design."

What do chef trainees in Europe say about their training?*

All the results of the master's thesis can now be used in the cooking G5 countries to adapt curricula and as a basis for further studies. "We are united by a passion for cooking and, against the background of a Europe-wide shortage of skilled workers, at the same time a concern for the cooking profession," the leaders of the five German-speaking chefs' associations agree. "The results of the scientific evaluation help us to learn from each other and to set up the training in our respective countries well."