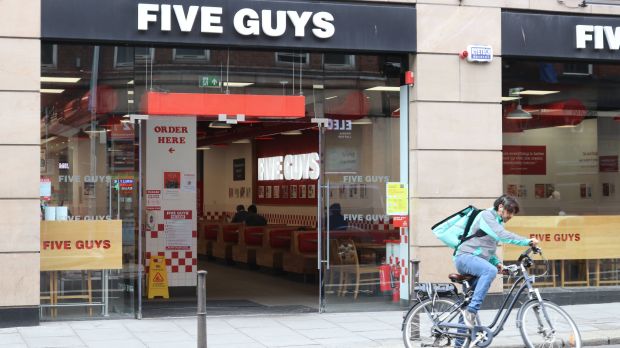 Imago Images / Xinhua
Five Guys in Dublin. For six weeks, restaurants are only allowed to offer delivery or take away meals.

Ireland is the first EU country to go into a second lockdown because of the Corona pandemic. This means strict curfews for the population. For restaurants, bars and pubs it means for the second time: take-away and delivery only. The measures will apply for six weeks from Wednesday.

Pubs, cafés and restaurants are now only allowed to sell takeaway or delivery meals. Hotels are only allowed to accommodate so-called "essential workers". A devastating blow to the already weakened hospitality industry. Even during the first wave of the coronavirus, some of the strictest and longest measures in Europe restricted everyday life in Ireland. Dublin restaurants serving only drinks were not allowed to reopen until the current tightening.

More extensive restrictions also apply to the Irish population. People are to stay at home and, for example, are only allowed to exercise within a radius of 5 kilometers of their own homes. Exceptions apply to commuting to work and necessary errands. Private visits are prohibited, as are all events except for strictly controlled weddings and funerals.

Prime Minister Micheal Martin said he hoped to ease the measures on December 1, to level 3 instead of the current highest level 5. Level 3 would mean that restaurants, among others, would again be allowed to serve 15 guests outdoors.

Restrictions in other EU countries

In other regions and countries of Europe, too, restrictions for restaurateurs are in place due to the increasing number of Covid-19 infections. In Northern Ireland , restaurants have been closed for four weeks for a few days. Restaurants are also closed again in the Netherlands, in Brussels partly. In Paris and other French corona hotspots , closing hours are sometimes already at 9 pm, bars have been closed again since 6 October. In Austria and Switzerland , restaurants are still open, but the regulations for restaurateurs have recently been tightened - for example, by making masks more compulsory or allowing fewer people per table.