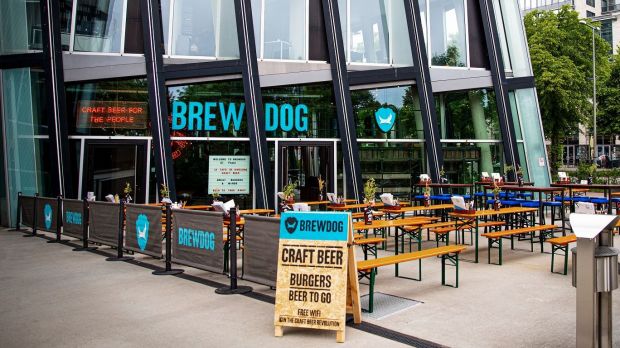 Brewdog is pushing its expansion worldwide, in the German market as well as to Austria. The British beer brand plans to open 40 new bars worldwide and the first craft beer hotel in Europe this year. More than 20 bars are planned for Germany and Austria in the next three years.


Already in the 2nd quarter of this year, three Brewdog bars are to be opened in Wiesbaden, Frankfurt am Main and Berlin Friedrichshain with the partner Bruton Hospitality. The Scots already operate a brewery in Germany as well as gastronomy locations in Berlin and Hamburg. For Austria and the regions beyond Berlin and Frankfurt am Main, Brewdog is now looking for additional franchise partners.

A lot of potential in Germany

"We see huge potential for Brewdog bars and restaurants across Germany," says Jack Anderson, Global Retail Growth Director at BrewDog, specifying his expectations of franchise partners: "They should bring expertise in the field of gastronomy and a strong network, know their local market down to the last detail and at the same time share our corporate culture."

The Scottish craft beer brand already operates over 100 restaurant locations worldwide. Brewdog bars and restaurants have different styles of beer from its own portfolio on the menu, as well as varieties from other craft brewers.

The Brewdog menu is based on farm-to-table junk food such as pizzas, salads, bowls and burgers. Fifty percent of all dishes can be served as vegetarian, and 25 percent can even be vegan. One of the 40 Brewdog bars planned for this year will launch in Las Vegas, as well as a first franchise location in Mumbai, India. In addition, Europe's first craft beer hotel is set to open before the end of 2021.
About Brewdog

Brewdog was founded in 2007 when two men and a dog set out on a mission to revolutionise the beer world. Tired of the uninspiring beer scene in the UK, the two founders, Martin Dickieand James Watt, began brewing their own beer as homebrewers.

Today, Brewdog is the market leader in craft beer and one of the fastest growing companies in the UK. Brewdog's Punk IPA is the number 1 craft beer in the UK and Europe.

Since 2020, Brewdog has been brewing its full headliner range for Germany - Punk IPA, Pale Ale, Elvis Juice, Kiezkeule and Zwickel Helles - as well as many specialty bottlings for the German and international markets at its brewery in Berlin-Mariendorf.

Brewdog now exports beers to over 60 countries and operates over 100 bars worldwide as well as breweries in Ellon (Scotland), Columbus, Ohio (USA), in Berlin and in Brisbane (Australia). The company has been Co2-negative since 2020. This means it takes twice as much Co2 out of the atmosphere as it emits.