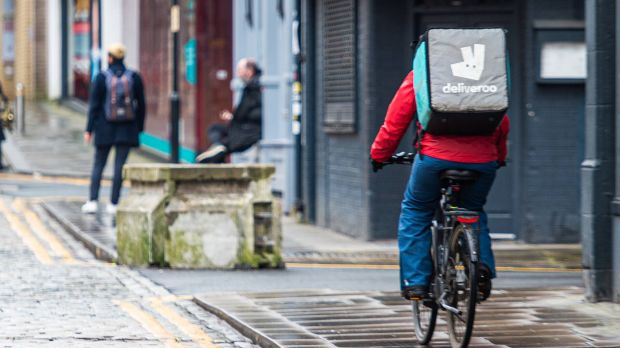 IMAGO / Stella Pictures
In France, the UK, Italy, the Netherlands and Spain, the employment of Deliveroo's delivery drivers is under legal review.


The company revealed in the prospectus for its IPO that it is battling legal claims or regulatory investigations in the UK, France, Spain, the Netherlands and Italy over the classification of its couriers, according to reports such as the Times of London. Deliveroo, for example, warned in advance that it might have to revise its business model if it was required to give drivers holiday and sick pay, minimum wages and other benefits.

Case in point Uber in the UK

Deliveroo is among the most prominent players of the so-called "gig economy". They are accused of exploiting outdated labour laws to cut operating costs. For example, drivers would be paid based on the number of meals delivered, rather than an hourly wage. The status of gig economy workers was in the spotlight last month when the UK Supreme Court ruled that Uber had breached UK employment law by refusing to provide benefits such as a pension and the living wage.

Last week, Uber granted employee status to its drivers in the U.K., in what is seen as a harbinger of upheaval in the gig economy. Deliveroo, according to British media, maintains that its couriers value the flexibility of their employment. Moreover, the company does not see the Uber ruling as a precedent. Nevertheless, the London-based company warned that its business model may be up for discussion.

According to a statement on Monday, March 22, Deliveroo is targeting a valuation of between £7.6 billion and £8.8 billion for its IPO later this month. It said it planned to sell around 384 million shares at between 390p and 460p each (45 and 53 Ct). This represents a value of 1.6 billion pounds (€1.86 billion) in the middle of the price range. The company plans to keep about £1bn. The rest will go to existing investors, it said.

Deliveroo founder Will Shu will raise up to £31m from the share sale and keep 6.3 per cent of the company - a pot valued at £554m at the top end of the range. It has a further £122m in unvested options. Under a two-tier structure, Shu will have the power to block unwanted takeover attempts, but this will expire in 2024. Amazon will sell about PF100m of shares but will remain the largest shareholder with an 11.5 per cent stake.