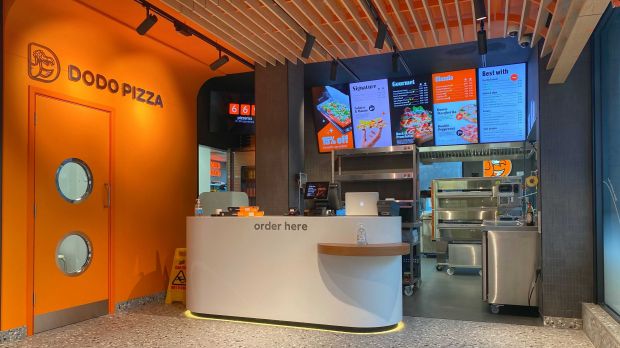 The Russian franchise chain recently opened its first self-run operation in the spa town of Lemington Spa, UK, and is unveiling a new concept following its German launch in November.

With the opening of the Warwick Street site, the company has launched a new formula: a fast gourmet delivery and takeaway brand based on Roman-style pizza dough. The traditional Italian recipe makes the base and crust lighter and crispier. It is more in tune with the preferences of the modern customer, according to the head office. In addition, the pizzas can be baked in less time than traditional American pizzas - resulting in faster service. The Roman pizza is made rectangular, not round. The offerings include three pizza varieties in two sizes - "Classic," "Gourmet" and "Signature" pizzas, as well as sides, drinks and ice cream.

The just under 150 square metre site in Lemington Spa includes a segregated dough production area, which will be used to supply up to five additional planned retail units in the region in 2021. Franchising of the new model is due to start in early 2022. In the UK, Dodo Pizza already has four franchised stores, with plans to have up to 50 sites by 2023.

The entire delivery process will remain in the hands of the technology-driven company. Dodo IS is Dodo's tech platform for managing QSR units, which its own team has been building since the day the brand was founded in 2011. It is run in the cloud and consists of back-of-house solutions (order tracking, appointment management, etc.) and a suite of digital tools for customers (apps, website). Dodo IS is further developed by Dodo Brands' tech team, which consists of over 120 software engineers and analysts.
Dodo Brands founder and CEO Fyodor Ovchinnikov said, "In the next few years we will focus heavily on development in the UK. It is one of the biggest markets for pizza delivery in Europe. Competition is fierce, but we are sure there is room for new innovative players. We see great potential in the UK and believe that our company's total openness, integrity and customer focus, as well as our tech platform, will enable us to attract business partners, win favour with customers and build a strong brand in the UK."

Dodo follows a policy of "radical transparency". The Dodo Brands website will publish any sales figures for each site. On December 17, the first day in Lemington Spa, the new store made £1,471 (around €1,620). "What an auspicious start for our new fast-casual concept designed specifically for the UK market!" says the company's head office.
About Dodo Pizza
The company was founded in Russia in 2011 and has more than 660 stores in 14 countries. According to the ranking of the trade magazine FoodserviceEurope & Middle East, Dodo is the third fastest growing restaurant brand in Europe and ranks 84th in the Top 99 Foodservice Ranking 2019.
Dodo Pizza is part of Dodo Brands. In addition to the pizza chain, the umbrella brand also brings together a coffee bar brand DrinkIt and kebab brand Doner42.