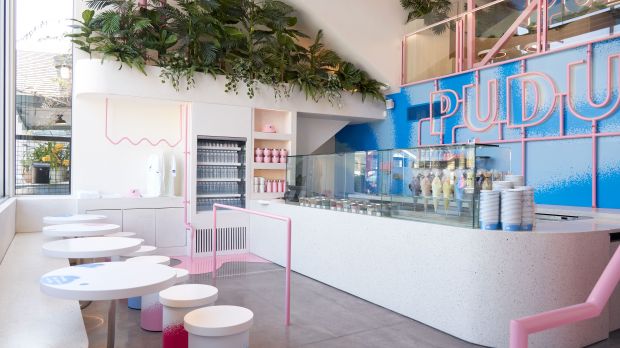 Dr. Oetker Hospitality Group
The exclusive pudding works of art are prepared in front of the guests.

The first Pudu Pudu unit was launched in Los Angeles. The location was also chosen to match the trendy concept: the site is located on the iconic Venice Beach promenade. Two more stores are to follow later this year.


The concept focuses on pudding - but not in its traditional form. Rather, it's all about "edible art," according to concept developers at Dr. Oetker Hospitality Group, a subsidiary of the Dr. Oetker Group. The Instagram-worthy indulgences combine unusual pudding flavors (e.g. Coconut Pineapple, Wild Blueberry or Turmeric) with creative (superfood) toppings such as spirulina, edible flowers, strawberry dust or toffee popcorn. The basis for the pudding is regional organic milk, a dairy-free version is also available. For optimal fluffy consistency, the pudding is served at a temperature of 0°C.

Originally, Dr. Oetker Hospitality Group, whose advisors include Mario C. Bauer (Vapiano; Curtice Brothers), had planned to open the first Pudu Pudu store as early as March 2020. But the Corona pandemic, including strict restrictions on restaurants in California, threw a wrench in the plans. Under relaxed conditions, the following still applies now: only a quarter of the seats may be occupied. However, this is of little significance, as the restaurant is counting on customers buying pudding primarily to go, according to an Oetker spokesperson.

The store itself is just as visually hip as the innovative pudding creations: the two-story store with a large window front was designed by the UXUS design agency. Under the Pudu Pudu illuminated sign, guests can watch their pudding being transformed into a work of art. Also emblazoned in illuminated lettering on the façade above the entrance area is the concept's namesake: the pudu. It is considered the smallest deer species in the world, making it just as unusual as the dessert creations offered here.

With Pudu Pudu, the Oetker Group is deepening its gastronomic commitment. In June 2020, the long-established company had already introduced the concept "Mrs. Renate" in an Edeka store in Koblenz. It combines a bakery, bistro and convenience store. In Lucerne, the café concept "Gugelhupf" had to close at the beginning of the year after three and a half years due to the Corona crisis. Nevertheless, the company plans to expand in Germany with the "Gugelhupf & Du" concept. Two cafés are planned for Frankfurt am Main. They are to open "as soon as the pandemic allows", according to an Oetker spokesman. The pudding concept is also to expand. There is talk of two more Pudu Pudu restaurants in Los Angeles.