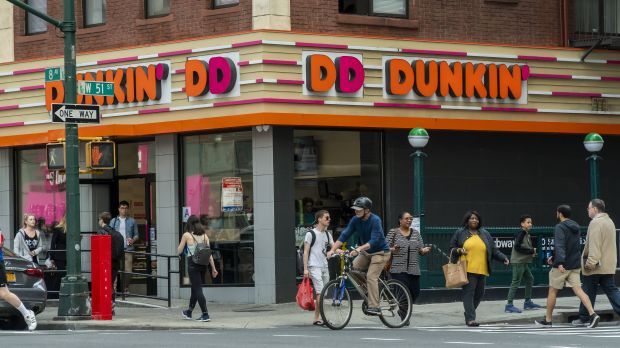 Imago Images / Levine Roberts
Since the rebranding at the beginning of 2019, "Dunkin'" is missing the "Donuts".

In 2019, Dunkin' Brands - the US parent company of Dunkin' and Baskin-Robbins - achieved its self-imposed targets for revenues (including royalties, franchise fees, rentals), operating income and earnings per share. The company announced this in the annual report for the fourth quarter and the full year 2019.

Dunkin' Brands recorded like-for-like growth for 2019 in all business segments: Dunkin' US increased by 2.1 percent year-on-year, Dunkin' International even by 5.7 percent. Baskin-Robbins grew by 0.8 percent in its home market of the USA and by 1.9 percent in international markets. Dunkin' Brands estimates worldwide system sales in all branches at 12.17 billion US dollars, spread across a total of 21,297 locations (Dunkin': 13,137, Baskin-Robbins: 8,160). In 2019, exactly 385 new locations were opened (Dunkin': 266, Baskin-Robbins: 119).

Comparable Sales, Like-for-Like etc.
Sales on existing space, also known as Same Store Sales, Comparable Sales or Like-for-like Sales, experts consider to be the "hard currency" of the industry. Here, changes in system sales from all locations that have been open for at least 13 months are considered. The reference figure is the same period of the previous year.

The last quarter of last year in particular was successful, said Dunkin' Brands CEO Dave Hofmann at the presentation of the financial figures: ""We had a strong finish to the year, led by Dunkin' U.S. comparable store sales growth of 2.8 percent in the fourth quarter, the highest quarterly comparable sales growth in six years, fueled by espresso and cold brew sales, coupled with the successful launch of the Beyond Sausage Sandwich, and sustained performance of our national value platforms." In 2020, Hofmann said, among other things, they want to invest 60 million US dollars in new coffee machines.