Eat Out to Help Out 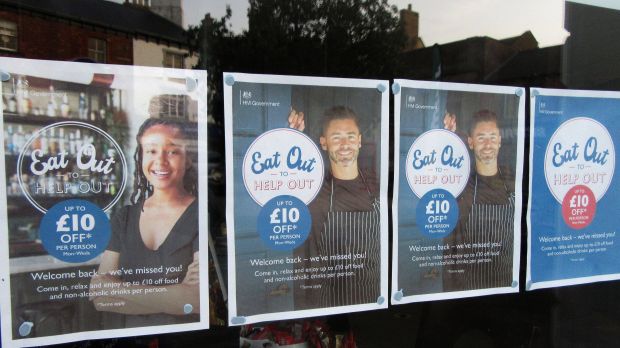 imago images / ZUMA Wire
Eat Out to Help Out is considered a complete success.

Since the introduction of the "Eat Out to Help Out" system, the Britisch restaurant industry has already issued 64 million discounted meals. By paying half the cost of a meal up to a value of ten pounds, the government wants to support the nearly two million jobs in the hospitality industry.


10.5 million meals were taken in the first week, and by the second week the number had risen to a total of 35 million. Data from OpenTable shows that during the third week of Eat Out to Help Out, the number of customers in UK restaurants was 61 per cent higher on average from Monday to Wednesday than on the same days last year.

The average Monday to Wednesday figures for the first and second week were 12 per cent and 41 per cent respectively, the government website continues. The data also shows that the number of customers in British restaurants has increased by 17 per cent compared to the same week in 2019.

Finance Minister Rishi Sunak said: "Today's figures continue to show that the British are committed to hospitality - with more than 64 million discounted meals to date. This is the equivalent of almost every person in the country eating out to protect jobs. I urge everyone, wherever they can, to continue to enjoy a safe meal while the programme is running." Currently, 84,000 restaurants have signed up for the program, which ends August 31st.

Several restaurants and larger chains have already announced that they will continue the campaign and offer discounts. The Deliveroo delivery service, on the other hand, is launching "Eat In" in September to help smaller restaurants. Until the end of the month, every Monday to Wednesday there will be a five pound discount on orders of 20 pounds or more. The offer is limited to the first 100,000 orders per week. National chains are excluded – unless they take care of the bill themselves.