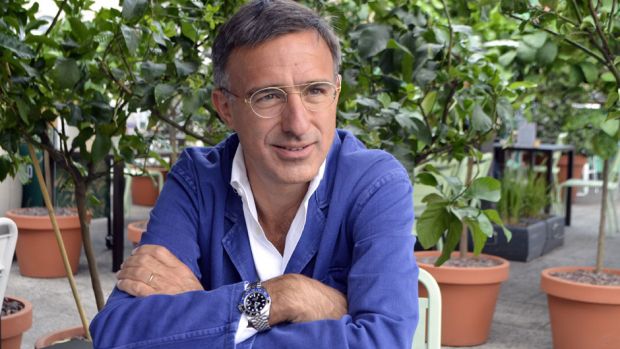 Mathias Himberg / LZ
Luca Baffigo also comments in the LZ interview on the newcomer on the market: Mercato Metropolitano.

Luca Baffigo, Vice President of the global retail and restaurant format Eataly, on expansion in Corona times, the sustainability megatrend and the power of emotions.


Mr. Baffigo, how did Eataly survive the Corona crisis?
We have one of the strongest retail brands in Italy and in the world, but Covid has given us a hard blow. The three pillars of our business model are retail, restaurants and teaching. Of these three, we had to close the last two. In 2020, we lost 30 percent of our revenue because of that. But we have learned to survive.

How did you do it?
Normally, our goal in sales is a 50/50 ratio between retail and restaurants. But in 2020, we had to rely more on retail, which gave us 7 percent more sales than the year before. We tried to make up for the loss in our restaurants with more outdoor dining - and with the delivery service, which gave us 35 million euros in sales. Our restaurants are now online and, on top of that, customers can order on platforms like Deliveroo.

To what extent will customers continue to order online after the pandemic?
The change in habits will catch on, even if it may initially decline a little. Our online share of total sales was 3 per cent before the crisis. During the pandemic it went up to 10, and after that it may go down to 8 per cent. But our target is 15 per cent in three years and 20 per cent in five years.

Doesn't that go against your business model? Eataly is all about experience, smell, taste.
But online can complement the physical experience. We don't have as many stores as the big retailers, so a lot of customers only come to us once a month. But these people can order our food and dishes online. That way, they can spend more time with us - and buy more.

As Vice Chairman, you are responsible for Eataly's global expansion. How much of a hindrance has Covid been?
Actually, not so much. Basically, we want to open two to three stores a year, plus a couple through franchisees in Asia. In the past twelve months we've opened stores in London and Dallas, plus two in Seoul and Tokyo. The next ones will follow in Tokyo, Dubai and San José in Silicon Valley. We are also looking for a location in Berlin.

And what about the planned stores in Verona, Madrid, and Brussels?
We actually need a little longer for that because of Covid. We want to open Brussels and Verona in 2022, and Madrid probably in 2023. It is impossible to analyze the potential of a location during a pandemic.

About the person
We hear their Munich location isn't doing so well. What's the story there?
This is one of our most successful stores. Three German operators have failed at the location near Viktualienmarkt, including Vapiano and Käfer. But we've already survived there for five years.

But is the market profitable?
Of course. In Munich, the retail side is really strong, sometimes accounting for more than 50 percent of total sales. But Munich is just not London or New York, the sales per square meter are lower. And yes, it took us two or three years to become a real shopping destination in Munich.

What are your plans in Italy? How will you change your concept if a recession hits the country, as many economists predict?
We don't think it will happen that way. We expect to get back to normal by September. Finally, money from the European reconstruction fund is flowing into Italy. This will make consumers feel that things are changing for the better. And sometimes feelings are more important than reality. Indeed, feelings often change reality.

So you don't think you need to change your concept?
Aside from being more online, no. We're an experiential-based format, with a 360-degree view of Italian food culture. Our customers love to see, touch, smell and taste authentic products from small producers. They want to see how the fishmonger cuts the fish they take home or eat on the spot.

What do you think of the Mercato Metropolitano concept, which apparently came from a former Eataly manager? Isn't it more flexible and open to food from all over the world?
First, this person definitely did not work for us. Secondly, you should visit the London branch sometime and see for yourself. I've been there and I say, that's zero competition for us. And third, we don't really care what happens next to us. We are proud to be Eataly.

Yet Fico, your big food theme park in Bologna, is not doing well. Why is that?
Because of Covid, it does take a little longer to build up attendance. Before that, though, we had three million out of a projected five. The concept was just a little too streamlined. We're adjusting that now.

Regional products, stories about producers, a sense of authenticity: many retailers are trying to copy you. How do you feel about that?
Our identity is so strong that it's impossible to copy. That's why it's good when others emulate us. We are happy when customers' habits change and our manufacturers grow with this movement. It's only when they get too big that we sometimes end our relationship with them. After all, we want to support small Italian producers.

The company Eataly
Sustainability is a big trend in Covid times, and your founder Oscar Farinetti said Eataly should emphasize that more. How do you plan to address that?
We've done that from the beginning, choosing small producers who preserve the biodiversity of Italian agriculture. We have always promoted seasonal products that cost less, taste better and are better for the environment.

But what are you putting on top of it now?
We have joined the no-plastic movement. Our goal is to reduce single-use plastic by 98 percent. London is our first store to focus on this. We are learning to sell drinks only in glass bottles, pack pasta in paper bags and use biodegradable plastic for fresh produce.

Why don't you just sell more organic food?
That's just a label that we don't always trust and that the big manufacturers use. We want to check for ourselves whether our small producers are working sustainably.

But isn't that hard for your customers to understand?
After all, that's the strength of our brand: our customer believes us that 100 percent of our products are sustainable - and better than organic products.

As the founder of Eataly, you've accomplished a lot. What's left to do?
Eataly has only one founder, Oscar Farinetti. I've only been with him from day one. And I look forward to continuing to work for Eataly for the rest of my business life. I consider it my mission to bring Italian food culture to the whole world. And there are still a lot of cities we can go to. Actually, all the major cities in the world.