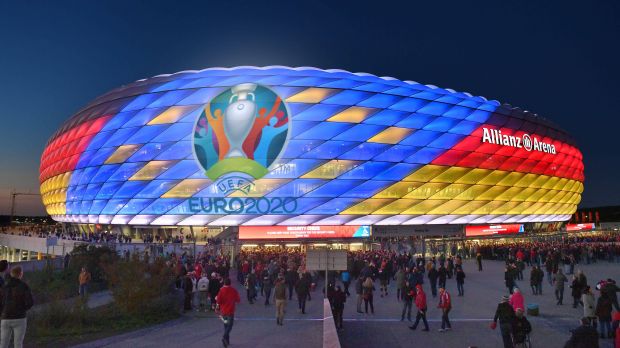 Imago / Sven Simon
Munich will host four Euro 2020 matches. With a permitted stadium occupancy rate of 20 percent, the Bavarian capital is bottom of the league in terms of capacity utilisation. London, the venue for the final, is allowed to occupy 25 percent of the seats. As things stand, Budapest is even allowed to sell 100 percent of the stadium seats.

117 million euros will be earned by Euro 2020 host cities during the tournament this summer, predicts Pitchinvasion.net. The latest study from the betting platform predicts which host cities will earn the highest and lowest revenues this summer in relation to stadium attendance restrictions.

An estimated total of €117 million is expected to be generated by the eleven host cities - a total of €194 million less than the revenue forecast before Corona. The reason for the significantly reduced revenue is the capacity restrictions in the stadiums.

According to the study, London potentially benefits the most from the tournament(€27.3m), followed by St Petersburg (€25.7m) and Budapest (€20m). Amsterdam is estimated to earn at least 3.1 million euros.

However, London faces the highest losses of 65.8 million euros in the current scenario due to spectator restrictions, compared to the numbers expected under normal circumstances. Dublin is expected to have the second highest losses (€25.3m), followed by Glasgow at 19.3m euros.

Budapest 's revenue, on the other hand, is likely to remain the same as the city plans to fully open its stadium. Saint Petersburg will benefit from hosting three additional matches following Dublin's withdrawal, securing an additional 13.3 million euros in revenue.

To prepare the forecasts, visitor numbers were estimated using key information such as the number of matches or stadium size. In addition, the average expenditure of tourists in the host countries was examined. This included costs for accommodation, restaurants as well as other expenses, excluding transportation. Spending levels were calculated for visitors from all 24 nations participating in the tournament.