Dylan Watson-Brawn is Chef of the Year

Dylan Watson-Brawn of Restaurant Ernst in Berlin is the chef of the year according to restaurant guide Gault Millau.

Ernst is one of the most interesting restaurants in the republic, the restaurant testers wrote in their justification for the award in the new edition of the gastronomy guide for 2022, which has now been published. In its fifth year of existence, they said, it had found a maturity and individuality in terms of craftsmanship and concept "that is highly rare, and not only in this country."

The cuisine of Canadian Watson-Brawn (born 1993), who learned to cook in Japan, possesses "what is still a rarity in top cuisine: a clear, unmistakable vision," Gault Millau emphasized. At the center, he said, are Japanese techniques such as flavor imagery and uncompromising care for the quality of the products, which often come from the region and whose selection depends on the season.


Ernst in Berlin's former working-class district of Wedding was opened by Watson-Brawn in 2017 and has since caused a stir in Germany and internationally. At first glance, it's "devoid of any outward sign of inviting hospitality" behind linen-covered windows and a forbidding steel door. Only eight guests are received per meal, seated side by side "at the Japanese wooden counter in front of the open kitchen." Each guest receives the same menu of often far more than 20 small courses for the standard price of around 400 euros including drinks, payable in advance. Guests watch the food being prepared and are expected to "interact with the team throughout the process."

Gault Millau says it recommends the 1,000 best restaurants in Germany. About 100 restaurants were newly included. The three best restaurants with five chef's toques and predicate are the Vendôme in Bergisch Gladbach (North Rhine-Westphalia), Victor's Fine Dining in Perl (Saarland) and the Waldhotel Sonnora in Dreis (Rhineland-Palatinate).

They are followed, with five normal chef's hats, by Aqua in Wolfsburg (Lower Saxony), Schwarzwaldstube in Baiersbronn (Baden-Württemberg), Tim Raue in Berlin and, as new entrants in this category, Restaurant Haerlin in Hamburg and Restaurant Schanz in Piesport an der Mosel (Rhineland-Palatinate).

Gastronomer of the Year 2022 was Hermann Bareiss (Bareiss, Baiersbronn). Eric Huber (Erno's Bistro, Frankfurt/Main) was honored as Host of the Year. Discovery of the Year is Adrian Kuhlemann (Restaurant Kuhlemann, Neustadt an der Waldnaab). Viktor Gerhardinger (Tian, Munich) is the Rising Star of the Year. Sommelier of the Year was Christophe Meyer (Le Pavillon, Bad Peterstal-Griesbach). And as Patissière of the year the testers selected Larissa Metz (Favorite restaurant, Mainz). 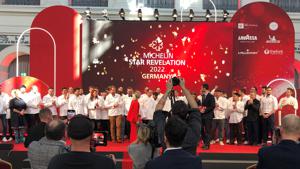 Guide Michelin: More stars than ever 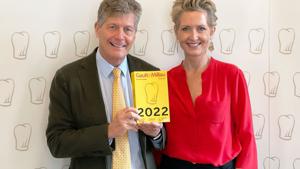