Aid package no. 2 starts on 1 November 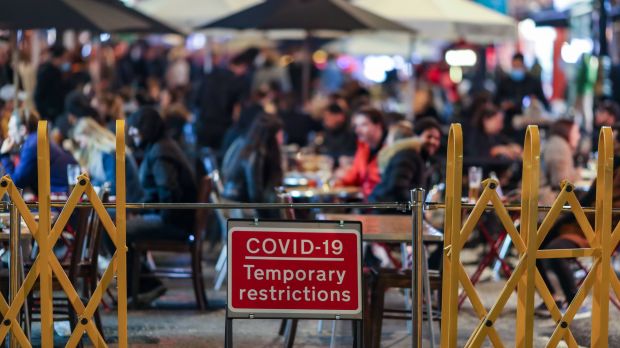 Imago Images / VXPictures.com
As the situation in Great Britain is worsening due to renewed corona restrictions, the government is announcing a second round of support as of November 1.

Due to the current pandemic situation, new regional lockdowns and expected further restrictions in Great Britain, the British Finance Minister Rishi Sunak has announced the continuation of government support. When the first aid measure expires on 31st October a second programme is due to take effect on 1st November.

As part of the second round of support, companies should receive two-thirds of their wages from the state for employees on forced leave, up to a maximum of 2,100 British pounds, reports the Frankfurter Allgemeine Zeitung. The hotel and restaurant industry in Great Britain provides around 2.5 million jobs. On November 1st, the new support programme announced by the British government is to continue the "Job Support Scheme" that has been in place up to now and will expire on October 31st. The first temporary program was more generous. The term of the second one is limited to six months.

Wages to be taken over

The second measure applies to companies which , due to current and future corona-related restrictions, have to send employees on "holidays" during the winter months. According to the programme, these employers do not have to contribute to wages, but only cover social security and pension contributions. Further assistance loans are available for companies that have to close down completely because of the Covid 19 regulations, it is also said.

As many pubs and catering establishments in Scotland and in central and northern England in particular have had to close again due to the increased numbers of Covid-19 infections and further local lockdowns are expected, the industry expects further drastic losses.

Finance Minister Rishi Sunak also announced that the government will provide grants of up to £3,000 per month for companies forced to close. These grants will mainly go to companies that have not been able to reopen since March, such as nightclubs, according to media reports. However, the grants must be applied for. Greg Mulholland from the campaign for pubs expressed scepticism about this , according to the FAZ: What Sunak is now announcing is "not at all suitable to compensate for the pubs". It's "a good start, but it doesn't go far enough to avoid real hardship, job losses and company bankruptcies this winter," the FAZ also quotes the mayors of the Greater Manchester, Sheffield, Liverpool and North Tyne city regions affected by new lockdowns. They plead for additional support.

A new three-stage alarm system is to be introduced in Great Britain from 14 October, according to the latest announcement by Prime Minister Boris Johnson. Pubs and bars with a focus on drinks will be particularly affected - in Liverpool they are even to be closed completely. Restaurants may, however, remain open.
Boris Johnson stresses: "We don't want to return to a national lockdown, but we don't want the virus to break out. We must act to save lives and change our behaviour by restricting our contacts.

The three alert levels are medium, high and very high. Every four weeks the restrictions are to be reviewed.

The level 1 restrictions - medium category - are similar to what already applies throughout England: a 10 p.m. curfew for hospitality services and a ban on meetings with more than six people. If there are fewer than 100 cases of coronavirus per 100,000 inhabitants, the threshold for Level 1 is set, and if the number of cases begins to rise and local measures cannot contain transmission, Level 2 applies in these areas.

It comes into force when there are more than 100 cases per 100,000 inhabitants - currently the Greater Manchester and Nottinghamshire areas have been placed in this category. Private households are not allowed to mix indoors and up to 6 people may meet outdoors, subject to the "Social Distancing Rules".

Stage three comes into force if the measures of stage two have not been able to contain the spread of the virus - or if there has been a significant increase in transmission rates. Only Liverpool and Merseyside have been placed on this highest alert level to date.

Wales, Northern Ireland and Scotland have their own, often more stringent, measures. In Scotland, for example, there is currently a two-week phase in which the catering industry has to close down for the most part in the evening.

Enormous cost block for the government

The news agency Reuters learned from a source in the Treasury that the new wage support measures from 1 November would probably cost hundreds of millions of pounds sterling per month. Recent economic data for the UK show that growth in August was much weaker than expected and the economic recovery has slowed down.