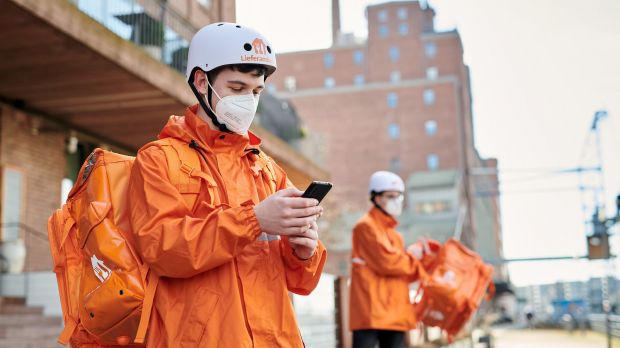 Although the new delivery service competitors Wolt and Uber Eats have recently added new cities almost every week, German industry leader Lieferando also continues to grow strongly. In the third quarter of 2021, the delivery service recorded 38.2 million orders in Germany, an increase of 35 percent compared to the same period last year. That's according to a trading update from parent company Just Eat Takeaway.com.

According to the report, Just Eat Takeaway.com brokered around 266m orders across all markets in Q3 2021 (Q3 2020: 213m, +25%). This means that the increases are not quite as strong as they were at the start of the year: in Q1, orders were still up 80% compared to Q1 2020. However, this was largely due to both the increased importance of the delivery business through Corona and the merger with Just Eat. The merger of Just Eat and Takeaway.com was finalised in April 2021, but was already included in the Q1 figures for ease of comparison.

The group's two fastest-growing markets in Q3 2021 were the UK (69.9m orders, up 51% y-o-y) and Germany (38.2m, up 35%) . The acquisition of the US delivery service Grubhub (completed in June 2021) moves the German brand Lieferando into third place behind the US market in terms of order volume. This shows 63.5 million orders in the quarter, but a rather low growth of three percent compared to Q3 2020.

Business with own drivers continues to grow

The volume of deliveries with the company's own fleet of drivers, known as Scoober,continued to grow disproportionately compared to total orders. Here, too, the UK is the growth driver. Orders in the segment rose from 6.7m in Q3 2020 to 30m in Q3 2021, an increase of almost 350 per cent. This means the company is delivering just over 43 per cent of its total UK orders with its own drivers. In other markets, such as Canada, that percentage is even higher at 96 percent.

The number of deliveries with the company's own drivers has also continued to rise in Germany, with an increase of 62 percent. Compared to total orders, the share of scoober orders remains stable at a comparatively low level of just under eight percent. Delivery with own drivers is considered significantly more costly and less profitable for Just Eat Takeaway.com compared to pure order brokering, where the restaurant delivers itself. For restaurateurs, the commission they have to pay to Just Eat Takeaway.com is significantly higher, at around 30 per cent, if they use their drivers. If they deliver themselves, the commission is on average 13 percent.

In its trading update, Just Eat Takeaway.com also discloses what it calls Gross Merchandise Value (GMV) , which is the gross sales brokered by orders. This increased in the quarter to 6.8 billion euros in all markets. In Germany, the value increased from just under 0.6 billion euros to around 0.9 billion euros. In the trading update, Just Eat Takeaway.com also provides an estimate for full-year GMV: Including Grubhub, it says orders of €28bn to €30bn are expected to be brokered across all markets in 2021. 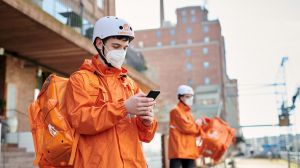 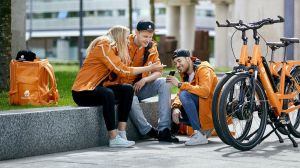 Lieferando parent is in the red