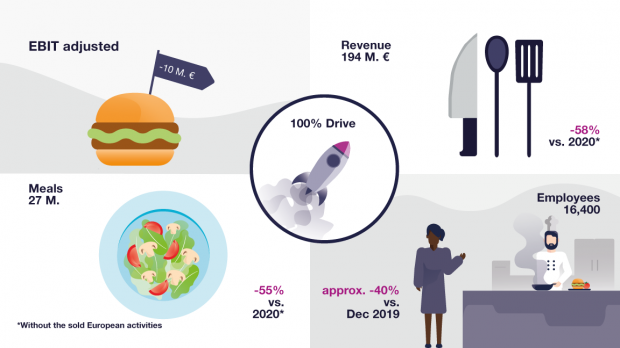 LSG Group
LSG continues to feel the effects of the Corona crisis. Most recently, 55 percent fewer meals were produced than before the crisis.

The LSG group continues to feel the effects of the Corona pandemic on the travel industry in the first quarter of 2021. The company's revenue fell by 71 per cent to EUR 194m (previous year: EUR 660m) due to the decline in passenger numbers among airline customers worldwide and the lower number of long-haul flights. Excluding the European business, which was sold at the end of 2020, this represents a minus of 58 per cent.

"We have stuck to strict cost management and secured our liquidity, but at the same time developed new strategies and made ourselves more efficient organisationally in many areas," said Dr Kristin Neumann, CFO of LSG Group. "I am convinced that after the Corona crisis we are a leaner but more powerful company and an attractive employer."

Government aid - such as the US CARES Act - helped improve the financial situation, according to the company. Still, LSG Group's headcount (international, excluding EU business) fell about 40 percent from the end of 2019 to 16,400.

Down 55 per cent in meals

With a new corporate mission statement ("Our mission is to connect food and people. Everywhere."), the LSG Group aims to succeed in traditional catering markets and new business segments in the future. "Culinary delights of consistent quality and reliable logistics remain our core competence. With our digital solutions, we are also making it even easier for our customers and their passengers to enjoy these benefits," says Erdmann Rauer, CEO of LSG Group.

The new corporate strategy is based on a total of five revenue streams, starting from the core business of airline catering, with a new focus on in-flight sales, technology/digitisation and food commerce (retail and home delivery services).

According to the company, all regions are currently testing new business models outside the airline business (non-aviation) and have already won numerous significant contracts. "New on-board retail concepts for the Lufthansa Group, which were developed in cooperation with the LSG Group subsidiary Retail inMotion, are an example of how the on-board retail business is also growing," it says.

The company's on-board retail activities are supported by new technologies such as the autoclaving of food, which was recently used in the space food dishes for ESA astronaut Matthias Maurer and his trip to the International Space Station (ISS).

For airline and convenience retail customers, it means less waste thanks to a longer shelf life without refrigeration. "In addition, we are focusing on even more sustainability in the future. We have committed ourselves to six of the 17 goals for sustainable development - the Sustainable Development Goals of the United Nations - and are pursuing targeted projects that focus on these," says Erdmann Rauer.
About LSG Group:
The LSG Group (International) is headquartered in Neu-Isenburg near Frankfurt and has an extensive network of joint ventures and partnerships around the globe. In the pandemic year 2020, the 12,500 employees at 140 locations in 40 countries worldwide generated consolidated revenue of €945 million. LSG Sky Chefs produced 244 million meals (including minority interests) in this period. 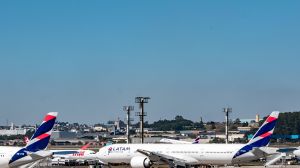 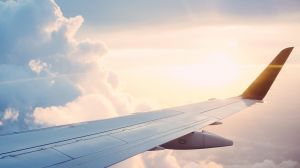