The most expensive donut in the world 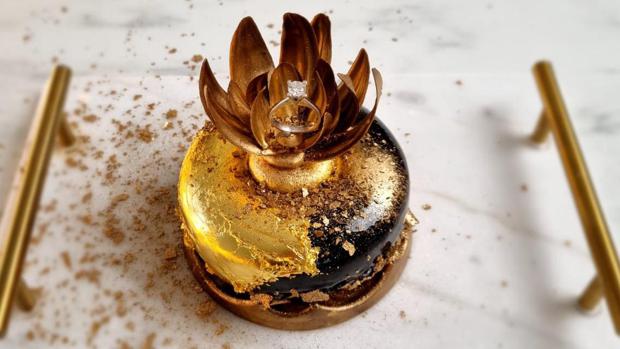 The Royal Donuts chain has added a special product to its range for people who want to get married. The first inquiries for the offer have already been received.


Every engagement includes a ring. Recently, the German-based doughnut chain Royal Donuts has also been supplying one on request. For the marriage proposal, however, interested parties have to dig deep into their pockets. At 10,000 euros, the sweet curl is rather not for the small purse.

Four inquiries for 2022 have already been received

According to internal information there are already four inquiries for this year for the pastry, confirms Ertun Tekbas, with Royal Donuts responsible for the Franchise management and marketing. Behind the "most expensive donut in the world" is not a clever marketing move, but rather a serious business idea. The company is currently working on revising its website so that interested parties can place an order there for the engagement ring of a different kind. The preparation time that the company reports for processing the order should be two to three weeks. After completion Royal Donuts delivers the engagement ring of the somewhat different kind to the desired place - chauffeur and limousine inclusive.

The donut comes with real gold

Two working days need the coworkers in the Donut manufactory, in order to make the most expensive of its representatives. The dough is filled with a fluffy, sweet tonka bean custard cream, and a light hint of saffron refines the taste. The basis of the extravagant look is a black mirror glaze, into which accents of real gold are incorporated. The world's most expensive donut is crowned by a gold-plated fleur de chocolat in the shape of a cattleya orchid - and the corresponding engagement ring. "There are no upper limits, the customer can of course also express wishes about the ring, such as whether the diamond should have more carats. However, 10,000 euros is the lowest limit," says Ertun Tekbas, adding, "The donut is actually a U.S. product - but the most expensive one comes from Germany, so that's a great story."

This text first appeared on www.abzonline.de.