Testing a McDrive for bycicles 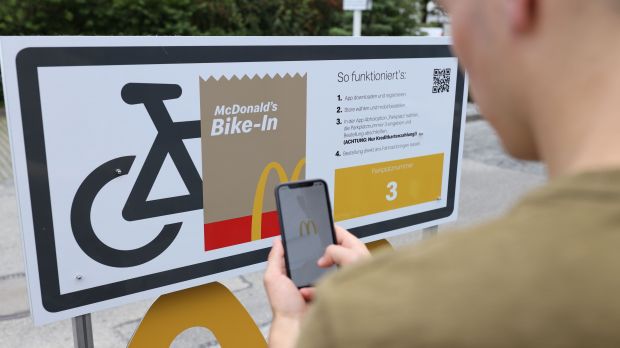 McDonald's Deutschland
From now on cyclists can also use a drive-in at McDonald's Germany.

McDonald's is launching the first McDrive for cyclists in three restaurants in Munich, Berlin and Cologne. Customers don't have to turn off the bicycle when ordering and paying. According to McDonald's, this service fulfils the wishes of many guests.

In recent months, especially after the lockdown was over, McDonald's Germany has received more and more questions from guests as to why it is not possible to cycle to the drive-in, the company reports. "By testing a bike-in, we want to offer a solution to this long-cherished guest wish," says Eva Rössler, designated company spokeswoman of McDonald's Deutschland LLC.

The principle is simple: A special pickup point for cyclists has been set up in the parking lots of the participating restaurants in Munich, Berlin and Cologne, which can be selected when placing contactless orders via the McDonald's App. Payment is made - also contactless - by credit card. The employees bring the order directly to the guest's bike. Bike-in users then only have to decide whether they want to eat burgers, fries & co. directly at the cyclists' tables set up especially for them or take them with them.

"In times of Corona, the new offer also meets the wish of many people to limit contacts and stays in closed rooms to a large extent," explains Eva Rössler.

And there is another argument in favour of Bike-In from the company's point of view: "McDonald's has set itself ambitious goals in climate protection. By 2030, we want to reduce the CO2 emissions of our restaurants and administrative offices worldwide by 36 percent compared to 2015 and the CO2 emissions per ton of product by 31 percent. Of course, we don't want to slow down people who cycle in a climate-friendly way, but rather support them.

The test operation of the Bike-In will run from now until the end of October at McDonald's locations in Berlin (Wrangelstrasse 35), Munich (Stäblistrasse 16) and Cologne (Koblenzer Str. 2-4). Afterwards it will be decided whether Bike-In will be available later in the whole of Germany.