FC Bayern with hotel and restaurants 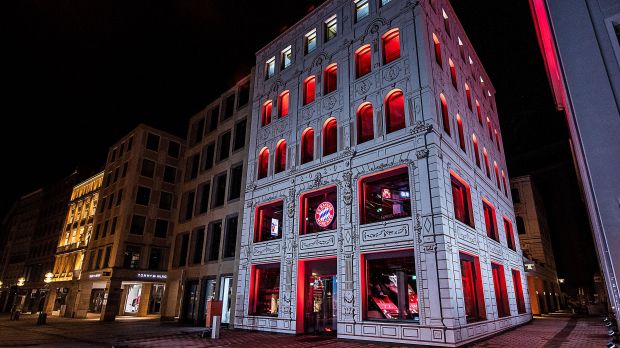 FC Bayern World has started at Munich's Marienplatz. The property extends over seven floors with the FC Bayern flagship store, two restaurants and a boutique hotel with 30 rooms.


The boutique-hotel in Bavarian style on floors two to four has 30 rooms, in the style of every German championship of FC Bayern. On the fifth floor is an event and meeting location with a title-laden view directly onto the towers of the Frauenkirche. As a partner of FC Bayern World, Do & Co will be responsible for the Bavarian and international restaurant, the boutique hotel and the entire event location. The listed hospitality company from Vienna is also responsible for the entire catering in the Allianz Arena.

FC Bayern World has a total area of 3500 square metres. 1000 of this alone comprises the FC Bavaria Flagship Storewhich extends over three of the seven floors. On the ground floor and on the first floor are two restaurants one with Bavarian and one with international cuisine.

For the brand presence in a top location, a specific search was made for a location where FC Bayern could make its presence felt. As with the construction of the Allianz Arena, the club also wanted to set architectural accents here; so they decided on a sgraffito style façade, which is based on the historic buildings from 1872. The respectful treatment of the architecture and the harmonious integration into the old town was a central thought in the project. Chairman of the Board Karl-Heinz RummeniggeOur FC Bayern World is another milestone in the history of our club. It is also a sign that we are looking ahead in times of a pandemic and are optimally positioned for the future. We have carefully considered a first-class appearance during the planning phase: In addition to the Allianz Arena, our club grounds on Säbener Strasse and the FC Bayern Campus, the FC Bayern Welt is a new eye-catcher for our club, which is a wonderful sight to behold.