"The years of plenty are over" 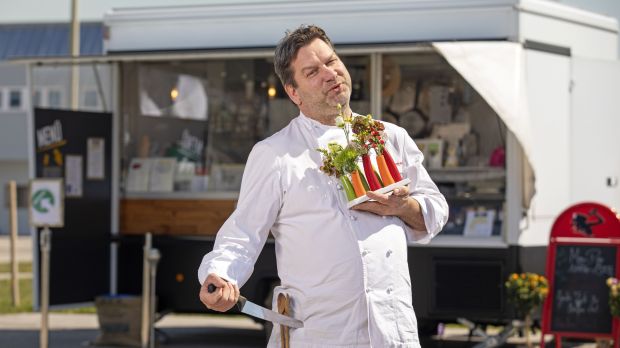 Sebastian Jahn / BSE-Pictures
Christian Loisl doesn't believe in complaining. Before he buries his head in the sand, he prefers to "simply" reinvent himself.


This text is an excerpt. Read the full portrait in the June issue of gv-praxis (in German). Read now!

Gastronomic whiz kid Christian Loisl has been starstruck by Corona. The former cruise ship chef's new dreamboat is a snack trailer anchored in the Gaplast corporate parking lot. The 100-employee company doesn't have a staff restaurant. Now Christian Loisl is an outdoor canteen chef, so to speak, and enjoys a customer base of around 30 Gaplast office staff, employees of neighbouring companies - and elderly gentlemen: people who slip out of their social Corona isolation to treat themselves to lunch at Loisl's fine offerings - and a healthy dose of social warmth at the same time.

Loisl is a storyteller; he has an anecdote for every kitchen trick. His metier is personal contact. A regular guest uses his street cuisine Monday to Wednesday, including exclusive Michelin-starred tips à la Loisl, and implements them at home on Thursdays. Loisl's consultant gene comes through and delights the guest and him as a culinary street worker in equal measure.

About the person
From school, Christian Loisl completes his training as a chef and pastry chef with Alois Dallmayr at home in Munich. In 1994 he is Feinschmecker "Rising Star of the Year", in 1995 the "Discovery of the Year" by Gault Millaut, who awards him 16 points and two chef's hats two years later. His path leads him through Europe's starred kitchens, into the Formula 1 Porsche kitchen truck and on cruises to the high seas. In 1999 he became a consultant to top gastronomy and in 2007 launched Loisl's Feinschmecker Manufaktur. Since November he is creative outdoor "canteen" chef on his own.
He prefers not to stew in his own juices at home, but enjoys cooking his own fine soup outside on the convivial front. "The fat years are over," says the ex-private chef for the Lehmann family in Charleston, South Carolina. Still, butter is one of his staple ingredients. "It gets the best out of carrot and co. aromatically. " Natural flavor enhancers are also sugar and salt. He puts his vegetables chopped in the evening into a precise mixture of these: "That also saves a third of cooking time and energy."

It was already a hard dry spell when Corona robbed him of all orders. In addition to regular engagements with Fisch Bäda at the Wiesn and chef training once or twice a year on the Royal Clipper, his main occupation was advising catering businesses. Suddenly, only one needed his advice: Christian Loisl.