Pret A Manger and JDE Peet's 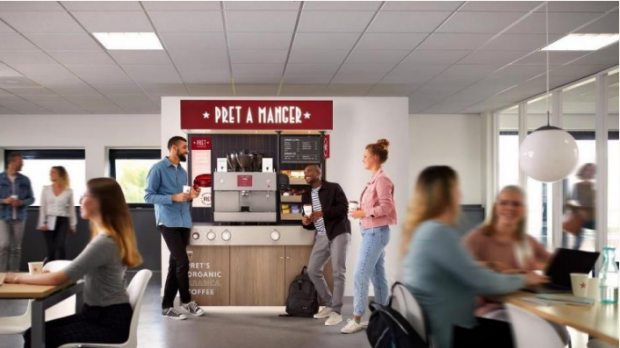 Pret A Manger is launching "Pret Express", the next step in its transformation strategy to bring Pret to more people. This also includes the plan to open 200 new units in the next two years.


The vending machines in the Pret Express concept will use organic coffee, organic tea and organic milk. Pret plans to be present with these in convenience stores, gas stations, universities, healthcare facilities and workplaces. Each Pret Express coffee station offers up to 21 drink recipes. The trial follows the recent launch of a new aluminium coffee pod range, the first project under the partnership between Pret and JDE Peet's, both part of JAB Holding.

The first step in the transformation plan was the launch of the first coffee subscription in the UK last year. Pret has also recently announced plans to double the size of its business over the next five years and aims to recruit at least 3,000 staff and baristas by the end of 2023.


The coffee and sandwich chain is attacking rival Costa Coffee with the launch of Pret Express. Costa Coffee, owned by Coca-Cola since 2019, and Europe's most widespread coffee bar chain, has around 3,800 coffee bars worldwide and more than 12,000 Costa Express units, a concept it hopes to grow with in Germany.

About Pret A Manger
Pret A Manger opened in London in 1986 and has around 400 units. The sandwiches, salads and wraps are prepared fresh on site every day. Unsold food is donated to local charities at the end of each day through the Pret Foundation, which works to combat homelessness, poverty and hunger. Pret currently operates in the UK, US, Hong Kong, France, Dubai, Switzerland, Brussels, Singapore and Germany.