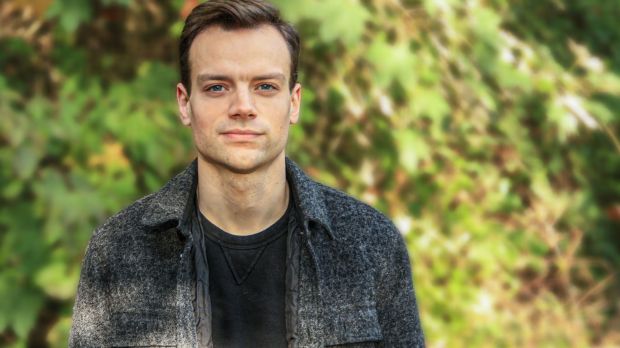 Trained chef Patrick Wodni is always trying out new things, wherever he is - undogmatic, turned towards others, strong on concepts. Now his efficiency is being increased. The goal: organic food in Berlin's canteens, schools, museums and clinics.

Patrick Wodni always does things differently. The whole family has always been civil servants, so to speak. He decides to be a cook. Cooks are either looking for fame as a TV star, reaching for the stars or despairing of the mini-budget of a clinic kitchen. Wodni promotes a different approach. Together with his philosophy of life, he loves to put his ideas into the heads and pots of community catering.
„Guests simply choose what they like.“
Patrick Wodni

Better food for everybody

Thus ticks one of the creative minds behind the ambitious project "Kantine Zukunft Berlin". And that's exactly how the 30-year-old, even without a high school diploma or university degree, has steadily increased his "impact", as he calls it, in his professional life. He is following his own mission. It is important to him that food is used with respect and that our daily bread is good for people, animals and the environment. For this, community catering seems to him to be the most effective medium of all – be it in Berlin or Weilerswist.

Weilerswist? This rather unknown place somewhere close to Cologne is the home of a distribution centre of the drugstore chain DM. "I gave up kitchen management there again for the new Berlin project," says Wodni. The motto being, not leaving something behind, but rather starting something new! His success in the exemplary employee-friendly company: "In half a year, we have increased sales of vegetarian dishes fivefold."

For his goal of better-fed capital city dwellers he now commutes across the republic. Over a period of three years, the Berlin Senator responsible for nutrition, Dr. Dirk Behrendt, plans to invest 3.2 million euros in healthier and more sustainable nutrition in public canteens, school and daycare cafeterias, clinics and museums. The food will be fresh and up to 60 percent organic. The Copenhagen House of Foods served as a model for its Europe-wide invitation to tender.

The concept of chef Wodni and the room planner, food cross-entry and "dining room" blogger Dr. Philipp Stierand was convincing: "Our goal is to change the canteen landscape and promote the self-efficacy of the kitchen staff during the implementation," says Wodni. Talking about and giving the chance of "Empowerment". A research assistant has already been hired. Two trainers are to follow. "In Copenhagen, up to 90 percent organic has been implemented in some cases. But most importantly, a social change has been initiated." That is also Vodni's goal – for the long term.

Since the plans have been published, there's been a lot of interest. "Many people have contacted us. But we'll also invite kitchen teams." Now it's time to listen carefully, not to spoil things by overdoing it. If you want too much at a time, you risk failure. If the targets are met, a lot can be gained. But he is even more confident: "I am sure that we will achieve more than 60 percent organic here and there." Together with Stierand and the team, Wodni is delighted that he now has the means and possibilities to make sustainable improvements to all our food.
About Patrick Wodni
At the age of 17 he began an apprenticeship as a chef in Frankfurt am Main and supplemented his training with internships on Demeter farms. Born in Giessen, he gained experience at the Berlin star adorned restaurant Nobelhardt & Schmutzig. Then he transforms the kitchen of the Havelhöhe Clinic, Berlin, to a system with emphasys on organic and fresh. Most recently, Wodni managed the canteen of a distribution centre of the DM drugstore chain near Cologne. His last vacation: voluntary work in Paris for "Refettorio – Food for Souls", the initiative for the needy by Italian celebrity chef Massimo Bottura.