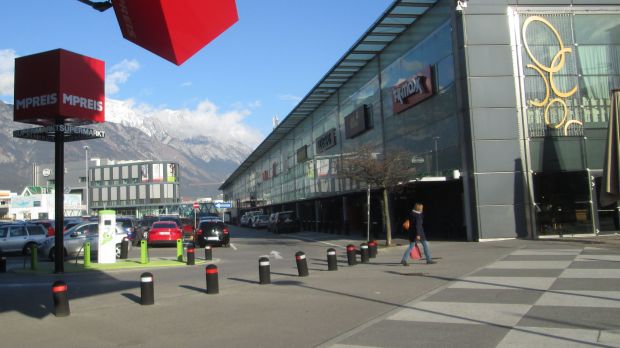 dez Innsbruck
The ECE-Center dez in Innsbruck came in third in the tenant survey conducted by ecostra.

It does not always have to be a big city location. Nor is the number of stores necessarily decisive for the success of a shopping center and thus the satisfaction of its tenants. Obviously, good returns can also be generated in the provinces and in smaller shopping centers. The "neukauf Spittal" is the first shopping center from Carinthia to rank first in the Shopping Center Performance Report Austria 2020.

Just 15 tenants, including Merkur, Media Markt, Deichmann and dm, occupy the total area of about 9,200 sqm of the Carinthian shopping centre neukauf Spittal. "These tenants are obviously absolutely happy to be able to operate shops in the shopping centre belonging to the Rutter Group at the location in the Drautal valley in Upper Carinthia", states Joachim Will, head of the location consultant ecostra from Wiesbaden (Germany). "Obviously, the location, concept and the performance of the operator fit together particularly well there.

Once a year, ecostra surveys the tenants of all shopping centres and retail parks in Austria on the economic performance of their shops at the respective locations. In addition to sales, the evaluation also takes into account location costs, i.e. above all the level of rent. The result thus shows in which shopping centers the tenants generate more or less good income and where not. The current survey involved 75 (previous year: 72) retail, gastronomy and service companies that operate a total of 1,833 business units in the centers available for selection. The survey was completed in mid-March 2020, so that all results are "still completely unaffected by the effects of the corona pandemic", as the ecostra Managing Director notes.

The previous year's winner among the shopping centres, the "Garnmarkt" in Götzis (Vorarlberg) came second this year. Third place went to the oldest Austrian shopping center, the "dez" in Innsbruck, which opened in 1970. "All of these centers have always been able to place themselves in the top group in recent years and thus demonstrate consistently outstanding tenant satisfaction. This is anything but self-evident in times of increasingly fierce competition, also due to online trading," emphasises Will.

"City Shopping Promenade" is the taillight

At the bottom of the ranking, and therefore the worst performing centre in Austria from the tenant perspective, is the "City Shopping Promenade" in the Lower Austrian capital St. Pölten. The "City Shopping Promenade" still achieved a very good tenant rating in 2012, but since then it has experienced a continuous decline. The second-to-last place is shared with identical ratings by "west" in Innsbruck and "WEZ" in Bärnbach in Styria. In third last place comes "Citygate Shopping" in Vienna, which improved slightly over the previous year.
Shopping Center Performance Report
ecostra GmbH has been preparing the "Shopping Center Performance Report" in Germany since 2011 and in Austria since 2012. This is a survey of the chain store tenants of shopping centers on the economic performance of their stores in the respective centers. The survey focuses on the expansion and sales managers at the corporate headquarters, not the local shop managers. The survey is open to retail, gastronomy and service companies that operate at least three stores in three different shopping centers in Austria at the same time.

This year the portfolio of centres to be evaluated consisted of 151 locations, including 96 shopping centres and 55 retail parks.

All results of the now available Shopping Center Performance Report Austria 2020 refer to a period before the lockdown triggered by the corona pandemic. The tenant survey was launched in January 2020 and ended in mid-March 2020, with 75 of the companies most frequently represented in the centers completing the survey programme.

In the category of retail parks, this time "ZIWA Baden" made it to the top. ZIWA", which opened in 2005 in the northeastern municipal area of Baden (near Vienna) with a rentable area of approximately 5,300 sqm, achieved an outstanding tenant rating with an average of 1.43 (according to school grades) and was able to displace the winner of 2018, the "GEZ West" in Gleisdorf (Styria), to second place and the previous year's winner, the "Panoramapark" in Neunkirchen (Lower Austria) to third place.

The Rutter Group was once again the winner in the question of the most efficient operator of shopping centres in Austria. Since the tenants were first asked this question in 2014, the management company, led by Stefan Rutter and Dr. Christian Harisch, has always made it to the top and thus asserted itself as the serial winner. This year, the Rutter Group was even able to increase the gap to the runner-up, SES Spar European Shopping Centers. In third place among the most efficient center operators comes ECE, which was able to place a property in the top 3 with "dez" in Innsbruck.

No to general Sunday opening

Other issues addressed in this year's report included Sunday opening, expansion activities over the next twelve months and renegotiating shop rents. The fact that just under 39 percent of the chain stores surveyed do not want to be open on Sundays at all is astonishing; a moderate number of 1 to 5 open Sundays would be ideal for just over 13 percent and a further 17 percent would plead for 6 to 10 open Sundays. "This means that the majority of the chain stores reject Sunday opening.

Rents are being renegotiated

On average, the surveyed chain stores intend to open 4.1 new stores in Austria in the next 12 months, while at the same time closing 2.6 units. While the number of new openings is thus almost at the level of the previous year (Ø 2019: 4.0 stores), the number of closures has risen noticeably (Ø 2019: 2.2 stores). In this context, the number of tenants who renegotiated the rent levels for their shop units in the shopping centers also increased. Some 18 percent of the tenants even achieved a reduction in rent of more than 20 percent. "This illustrates the economic pressure to which market participants are exposed. While the use of goods and personnel costs can hardly be reduced any further, rents are the only remaining adjustment screw through which noticeable savings still seem possible. We assume that rents will come under even greater pressure in the post-Corona period than we have seen in the market so far," expects Will.

About ecostra
ecostra GmbH is one of the leading management consultancies in the field of real estate management and retail trade. In addition to consulting tasks such as the optimisation of the branch network of retail companies, the preparation of location analyses and studies for expansion planning as well as feasibility and profitability studies for project developers and investors, ecostra also develops marketable space and utilisation concepts for shopping centres or analyses the opportunities and risks, e.g. the relaunch of ailing centres. In addition to the private sector, ecostra also works for public clients - e.g. cities, municipalities, administrative courts, chambers of commerce - and offers expert opinions for licensing, administrative and anti-trust court proceedings. The company's geographical area of activity covers all European countries, and its headquarters are in Wiesbaden, the capital of the state of Hesse.