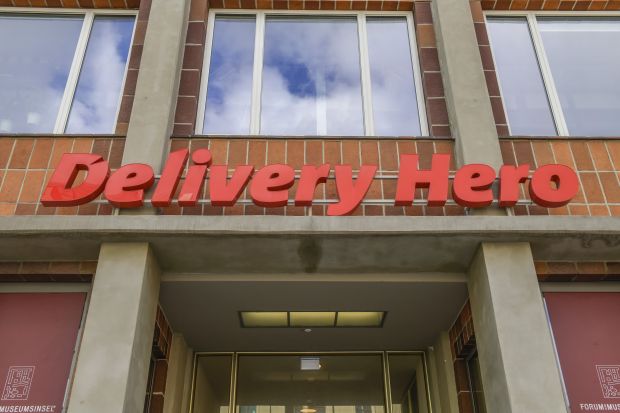 Imago Images / Schöning
The headquarters of Delivery Hero in Berlin.

The Dax is something like the Bundesliga of the stock exchange. The Deutsche Aktien Index – which translates simply to German stock index – contains the 30 most valuable companies in Germany. The race for the succession of the insolvent payment service provider Wirecard in the Dax has now been decided: The food delivery service Delivery Hero will move up.


Banks, the pharmaceutical and automotive industries, cement ... If you look at the composition of the DAX, it mainly reflects the "old economy". The thick ships of the German industrial and service society cavort here, which has been the backbone of our continuing prosperity for decades.

But even the DAX is not spared from the social and societal change - with Delivery Hero, a company that relies 100 percent on digitization is entering the arena.

For years now, the food delivery service from Berlin, which is currently one of the largest in the world, has been taking a lot of money, especially for acquisitions in Asia and Latin America, and continues to conquer new markets. Investors on the stock exchange are obviously happy to see this. The share price has almost quadrupled since the IPO in June 2017.

But a few skeptics like to look a little deeper into the balance sheets: Although the turnover of the technology group is rising steadily, the debts are also increasing. The company has had a strong first half of 2020 - also as a beneficiary of the Corona crisis - and expects revenues of almost 3 billion euros. In 2019, this was less than half (1.2 billion euros) in the same period. However, the loss is increasing along with the revenue, because Delivery Hero is investing a lot of money in penetrating new markets and using expensive campaigns to attract new customers.

Just a moment? Vapiano, I hear you hitchhiking ... gastronomy experts must be reminded of the sad story of the pizza and pasta specialist ...

Thus, Delivery Hero's losses will also increase proportionally to its turnover: 320 million euros are likely to be generated in this first half of the year, in 2019 it was already 240 million euros. The stock market doesn't seem to care: Although the tech group has not yet earned a cent, it is the new stock market favourite. If you need fresh money, loyal investors are queuing up.

The Dax comprises the 30 most valuable companies on the German stock market. The value of the company as a whole is the most important factor here. Profits play no role in this consideration. To determine the value, one takes the number of all shares in circulation of the company and multiplies it by the current share price. This results in the stock market value or market capitalization. Both mean the same thing.

Delivery Hero benefits from the fact that a large proportion of the shares are in free float. At the end of August, the free float as defined by Deutsche Börse AG amounted to 50.4 percent. The current market value is correspondingly 21 billion euros.

The fascination of numbers

But what is the fascination of this tech company, which has nothing more than a brilliant website and tens of thousands of biking messengers who ride from A to B like an ant? Very simple: The dizzying numbers behind this platform. They are undoubtedly impressive: Market researchers predict that more than one billion people will order food for around 60 billion euros via one of the major platforms in 2020. Delivery Hero alone, which cooperates with well over 600,000 restaurants, handles four million orders a day.

And unlike the competition, which is engaged in fierce cut-throat battles in Europe and the USA, the Berliners are concentrating on emerging markets where the delivery culture has been learned and where there is de facto no serious competition.

Originally founded in the German capital Berlin, Delivery Hero withdrew from the German market last year and became heavily involved in Asia. Large providers, such as Woowa in South Korea, were swallowed up for billions.

The most recent deal of the food delivery service, however, was a takeover in Germany: last December, the company bought the shares of the Berlin start-up Honest Food.

Since the Ghost Kitchen start-up is active with its virtual kitchens both in Austria and here in Germany, Delivery Hero could use these delivery kitchens to become active again in the German market now that it has been admitted to the DAX.