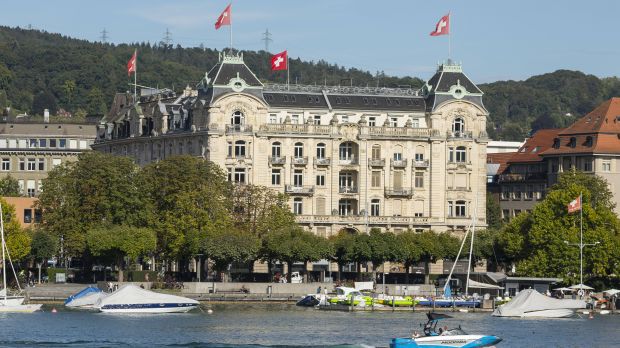 Imago Images / Andreas Haas
The 47 rooms of the Small Luxury Hotel Ambassador, Zurich, accommodate six different gastronomy concepts for one month, which are presented as pop-ups.

On six floors of the Small Luxury Hotel Ambassador in Zurich, six restaurateurs will be giving free rein to their culinary creativity from 8 October to 7 November 2020. Their repertoire ranges from plant-based cuisine to fine dining. An exciting marketing and guest loyalty tool for the luxury hotel during the renovation phase.

Interested parties can participiate in the pop-up event under the motto "Chambre Séparée" via the hotel's  homepage. The event is to fill the 47 vacant rooms on six floors of the Hotel Ambassador in Zurich, which is currently being renovated, for one month. In addition to well-known Zurich restaurateurs industry professionals from Modena/Italy and St. Moritz/Switzerland will be taking part.


1. In the bar in the lobby of the hotel on the ground floor, the team from the local distillery Turicum will show what cocktails and novelties from their own portfolio they have to offer.

2. The first foloor might be Interesting for fine-dining fans: the Italian concept Tartufo e Barolo by QN & La Scarpetta with the two young chefs Rocco Cavadini (he learned in Septime Paris and at the Osteria Francescana/Modena; awarded the title of best restaurant in the world in 2016 and 2018) and Giovanni Savio (Il Patio* Biella) is planning a Piedmontese menu with truffles, the Swiss Tages Anzeiger has found out.

3. The Zurich restaurant Drei Stuben, managed by Marco Pero, presents itself on the second floor with an autumnal menu plus show.

4. The multi-concept player Two Spice (awarded with the Hamburger Foodservice Preis in 2019), together with the Japanese restaurant Izakaya by Yooji's & Heavensake and in collaboration with Zurich star chef Nenad Mlinarevic, presents a plant-based cuisine on floor three as a culinary journey through Tokyo.

5. The team from the St. Moritz-based provider La Baracca also wants to delight the people of Zurich with its hearty food repertoire and musical playlist on floor four.

6. "Chalet for Fondue" is the name of the concept, which is set up for a month on the top floor under the roof and aims to offer an exciting range of fondues. Further stations in Switzerland are planned for the coming winter, including Zurich's main railway station.

Further gastro-pop-up ideas of the hotel industry
In addition to the Chambre Séparée campaign, there are already other hotel and restaurant projects in Switzerland, Swiss media report. The Zurich Hotel Helvetia on Stauffacher recently converted two hotel rooms into small dining rooms. And the Hotel Krone on Zurich's Limmatquai, so far without a restaurant, is planning to stage the temporary gastronomic concept "Kronenstübli" on the first floor from 14 October to 28 November. Motto: "Better drink wine than cry".
The idea of the gastro pop-ups was already implemented in Austria during the early days of Corona: On May 29, 2020, the Hotel Sacher in Vienna reopened its doors after the lockdown - and with it up to 152 mini-restaurants. The rooms and suites of the luxury hotel were converted for a short time as"Sacher Séparées" into gourmet locations. Social distancing in an exclusive atmosphere.