Coffee out of the trunk 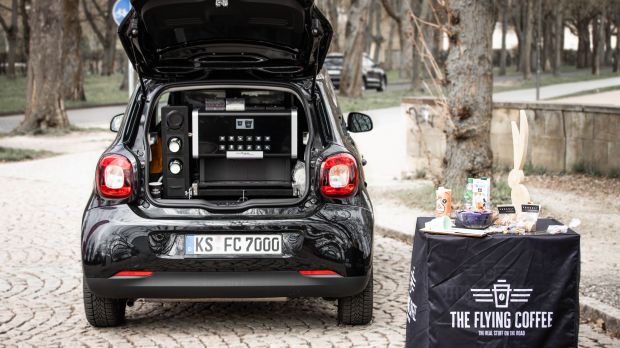 Regions in Germany with an undersupply of coffee - walking trails, playgrounds and the like - are served by the converted Smarts from The Flying Coffee. Launched a year ago, the company plans to have around 40 vehicles by the end of 2021.


Flying Coffee units are literally mobile coffee bars: A fully automatic coffee machine is installed in the trunk of the Smart, and instead of a rear seat, two lithium batteries ensure that the coffee machine can be in use for six to eight hours.

Management consultant Dr. Lars Lachmann launched The Flying Coffee a year ago with four other founding members to provide hot and cold drinks to regions in Germany where there is strong demand but little to no supply: at popular meeting places for walkers, at bus stops, playgrounds and businesses. The Flying Coffee can also be used as a mobile coffee bar at events.

Expansion under third-party and own management

The first Smart has been on the road in Kassel since January of this year. According to Lachmann, the response from customers has been so strong that franchise licenses are now being issued for the concept. There are currently five vehicles throughout Germany - three of which are already under third-party management. Ten more locations have already been announced for the coming months. By the end of the year, 40 The Flying Coffee cars are to be on the road throughout Germany. Lachmann wants to continue to grow both with franchise partners and under its own management.

In addition to coffee specialties, ranging from Caffè Crème for 2 euros to Latte Macchiato for 3 euros, tea and cold drinks are also offered. Snacks are offered individually by each partner on site in cooperation with regional bakers. According to Lachmann, about 15 hot drinks are served per hour on average.