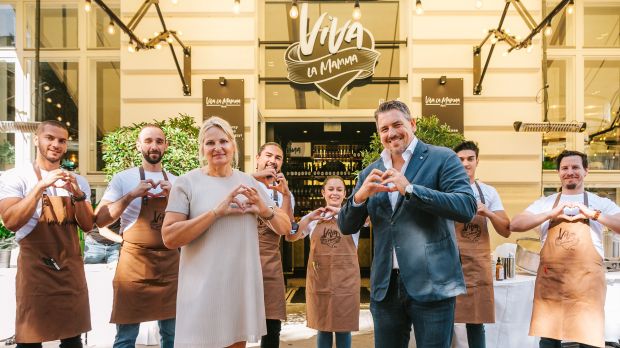 Philipp Lipiarski
With their latest concept 'Viva la Mamma' Gabriele and Robert Huth want to address a young audience. The core of the menu: high-quality pizza and pasta.

At the end of January, Gabriele and Robert Huth took over the Viennese Jamie Oliver restaurant from the Hungarian Zsidai Group as new franchisees. Only a few weeks later, the business was shut down. Now the location has opened its doors again - with its own Italian concept, without the prominent partner from Great Britain.

The fact that the new location remains Italian is of course due to the already existing equipment of the 550 square meter large restaurant, says Robert Huth. "But not only", adds the experienced gastronome. "The new concept is deliberately tailored to a young target group." The experience of the last weeks and months has shown that especially the young guests have retained their joy of going out and are more likely to visit the interior of the restaurant. "Our restaurants, which appeal to a young audience, are almost at the same level as last year. "Older guests are more cautious due to the fact that they belong more often to a corona risk group.

According to the current corona regulations in Austria, the tables are currently distributed at a distance of one metre across the spacious area of the new restaurant. In the near future, mobile Plexiglas walls will provide additional protection against infection in the interior.

The portfolio of Viva la Mamma: pizza and pasta. "All ingredients are hand-picked, we know the producers personally", explains Robert Huth. The guests would certainly "spend one euro more" for homemade pasta and high-quality ingredients. On the other hand, they would not eat high-priced meat dishes. The price range for pizza and pasta starts at 9.50 (Margherita) and ends at 18 euros (with truffle). The average receipt, according to Huth, will level off at 25 euros.

In addition to the menu, the appearance of the former Jamie's Italian Vienna location has also changed. Graffiti now decorates the walls of the two-storey restaurant.

The 'Viva la Mamma' is the last location of the eight gastronomic establishments of the Huth Group to end its corona-related forced break. "We have used the time of the lockdown to bring all establishments up to date, to partially rebuild and renovate them", reports company boss Huth. Afterwards, the company reopened step by step. "The end of August was the last sensible starting date for Viva la Mamma this year. Otherwise we would have had to wait until next year. The main factor was the motivation of the employees.

The summer was going well

After the restaurant business had recovered somewhat in the summer, Huth is looking anxiously towards winter. "Especially in the inner city, the loss of city tourism as well as of trade fairs and congresses is hitting us brutally. We have already given a lot of thought to how we will react to the upcoming challenges", says Huth. One possible solution would be to reduce opening hours and introduce two closing days. "Since employees already have to call in sick with a slight scratching of the neck, it could become tight in winter with the currently thin staffing levels. The only way to cope with this would be to reduce opening hours."