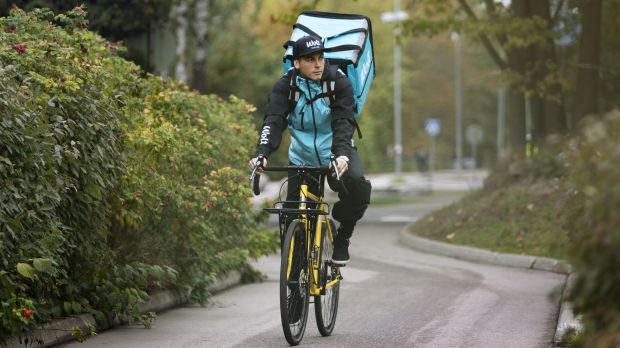 obs/Wolt
The Finnish delivery service Wolt starts in Berlin. 100 restaurants are already connected to the service.

The Finnish delivery service Wolt enters the German market with a location in Berlin. According to the company, over 100 restaurants are already connected to the service.

Wolt has just started in Berlin, but other German cities are to follow soon. Initially, Wolt will offer its service in the districts of Berlin-Mitte and Prenzlauer Berg - with the aim of expanding quickly into neighboring districts. Right from the start, Wolt has been working with more than 100 restaurants that deliver food to customers in Berlin with the help of couriers. The first restaurants include Beets & Roots, Good Bank and Sons of Mana. Customers pay a delivery fee of 1.90 euros, for longer distances of 1 kilometer or more 2.90 euros. The minimum order value is 10 euros.

"When we founded Wolt in 2015 with our first 10 restaurants in Helsinki, I never thought it was possible that one day we would expand our activities to Berlin," says Miki Kuusi, CEO and co-founder of Wolt.

"When I look at the current state of delivery services in Germany, I really believe that we can do a lot to make this country even more liveable," he continues. Following Deliveroo's withdrawal from the German market in mid-2019, Lieferando – a brand by Just Eat Takeaway.com – is the only remaining national delivery service in this country. With Wolt there is now a competitor again, at least in Berlin.

Wolt was founded in Helsinki. The conditions in the market for delivery services there are different from those in Germany: population size and density are low, weather conditions are difficult and there was no delivery service culture. In order to meet these geographical and logistical challenges, Wolt placed a special focus on technology, efficiency and customer experience right from the start.

"At Wolt we work as locally as possible. All the countries in which we operate operate very differently and act independently of each other. That's why we hire a local team in each country that knows the needs of our customers, the local culture and the local gastronomy. For example, our account managers answer a customer inquiry in the local language in less than a minute on average," concludes Miki Kuusi.
About Wolt
The delivery service Wolt Enterprises calls itself a technology company. The Helsinki-based company operates in 23 countries and more than 80 cities, delivering food from over 10,000 restaurants with over 20,000 suppliers. The company was founded in 2014 and today employs more than 1,200 people. The company is managed by co-founder and CEO Miki Kuusi.